Social apps often overlap each other. It’s the nature of the beast that if one service implements a useful new feature, several others will follow suit. On a day that has already seen Snapchat go all instant-messaging on us, Foursquare has announced Swarm, an app that helps you find close-by friends and discover things to do. The app represents a departure from the company’s check-in ways, and also throws down the gauntlet to a neat little feature that Facebook added to Paper only a week or so ago.

Even though Foursquare has remained popular over the years, the check-in format has become a little tired, and in order to move with the times, the company believes that Swarm is just what the social arena needs. But what is it?

In a nutshell, Swarm takes the check-in model and relaxes it, offering a more generalized idea of where your friends are, and helping you subsequently find things to do and enjoy once you’ve hooked up with them

Foursquare’s pre-existing discovery features will gradually be transferred over to Swarm, and while the Foursquare app will remain as an almost check-in-only service, it appears that the company is taking more of a vested interest in the newer app. 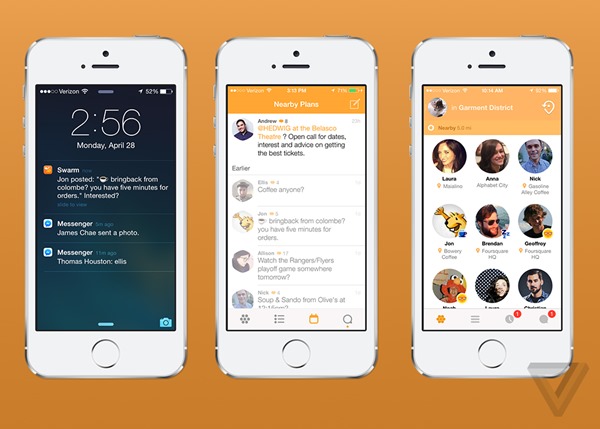 As you might expect, there’s no check-in element with Swarm per se. Foursquare’s main problem is that people only open up the app when they want to check in, which leads to everything feeling a bit mechanical and forced. When people fire up the Twitter app or Facebook, they usually do so on a whim, and essentially, the Foursquare team wants to rebrand Foursquare into something more open to general use such as those aforementioned.

Swarm will share your general location with friends, and also let you see who’s around you. From there, you can plan your adventures, and even though we’ll have to wait until its official roll-out to find out precisely how everything works, it’s good to see another social outfit attempt to branch out from its particular niche.

Swarm is at least a month away, but we’d imagine that it will iOS and Android right off the bat. Given that there’s a Foursquare app for Windows Phone, it’s also likely that Swarm will eventually make its way to the Windows Phone Store, although as ever, don’t count on it making that official launch.