With every new release of iOS comes a slew of features that expand on the OS’s capabilities and functionality, and let users interact with and use their devices in a different manner. The beauty of jailbreak tweaks, however, is that they expand on those features even further, making it possible to do things that the company didn’t allow by default. One such feature with iOS 8 was the Reachability aspect, which basically works only on the larger iPhone 6 and iPhone 6 Plus, bringing things in easier range by compacting them towards the bottom of the screen. While pretty great, there were certain limitations with the native implementation of Reachability, and those are what ForceReach – a freshly released Cydia tweak for iOS 8 / 8.1 – aims to address.

Available as a free tweak from the BigBoss repo in Cydia, ForceReach basically adds customization to the Reachability feature in iOS 8. Once installed, the tweak adds a new preference pane to the Settings app, from where you can do things like enforce Reachability in any orientation (portrait or landscape), keep it toggled for an infinite amount of time as opposed to automatically getting dismissed after a small, preset interval. 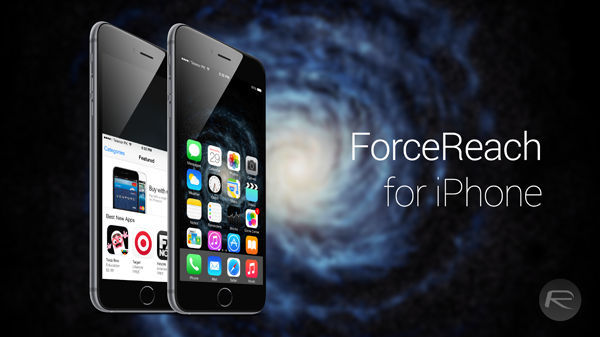 The tweak itself is really small in size, and since it’s available for free, there’s no harm in giving in a try should you have a compatible device. Speaking of compatibility, it goes without saying that ForceReach will work only on iOS 8 / 8.1, and for devices that have Reachability feature available natively, i.e., iPhone 6 and iPhone 6 Plus. Thus, if you’re an iPhone 5s or lower user, this tweak won’t enable Reachability for you even if you’re on iOS 8 (not that the 5s needs Reachability in the first-place; it’s pretty handy to use anyway). But, if you do want to enable Reachability on older devices, then you can go for tweaks like Reachability7 or ReachAll. 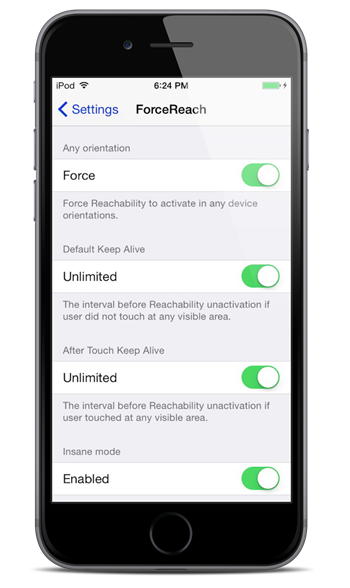 Tweaks like ForceReach indicate how powerful and infinite the possibilities can be for you once you decide to jailbreak.