The iOS keyboard has hardly changed since the earlier days of iPhone OS, and as such, the jailbreak community have consistently looked for ways to freshen things up for those who like to chop and change. Some alternative keyboards are a tad over-the-top, while others are just plain garbage, but when a designer manages to combine subtlety, elegance and minimalism in one fell swoop, we simply have to pay it a little bit of attention.

Flush Keyboard, which first came to our attention via Reddit, is about the cleanest iPhone keyboard you’re ever likely to see, in terms of aesthetics. In-keeping with the look and feel of iOS in general, it casually lessens the intensity of the symbols atop the keys, providing a calmer yet still just as practical interface whether you’re typing notes, writing emails, responding to iMessages and whatnot. 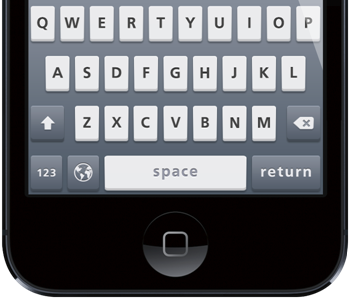 The keys themselves are more squared-off than the native offering, and this is where the elegance of this theme really shines through. The result of these card-like keys is a much more upmarket overall appearance, and when you install Flush Keyboard on your iPhone, you will instantly recognize the difference and it’s pleasing to look at from all angles.

In my opinion, Flush Keyboard is right up there with Dashing for iPhone in terms of keyboards that rejuvenate the mundaneness of the native look, and although this one is quite a bit less drastic than others we’ve seen, often it’s the tiniest alterations that prove most effective.

In order to install this particular theme, you will need the Color Keyboard for iPhone tweak which, if you’ve tweaked your device’s keyboard in the past, is something you should be more than familiar with. If not, please check out our initial coverage of the tweak, and grab it from the BigBoss repository.

Once you have Color Keyboard ready to go, you will next need to grab Flush Keyboard, which is available directly from the developer-cooked link over at Reddit.

Download it, install it on your iPhone, and let us know if you think it beats the original keyboard theme by dropping a comment via the usual mediums below.