Now that Apple has announced iOS 10 and macOS 10.12, everyone has been rushing to download and install the latest beta release of their favorite operation systems.

Currently only available to developers, the betas often need a little bit of cajoling in order to install correctly, especially in the case of iOS on iPhones and iPads, and as it turns out that iOS 10 is no different in that regard. While many have been able to install iOS 10 beta 1 with no issues whatsoever, it seems others have not been so lucky. 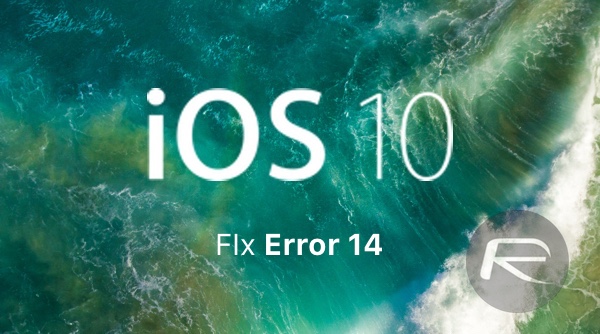 When it comes to installing iOS 10 in its current beta form, or indeed any further beta releases of the software, installing via an over-the-air update will always be the easiest. This requires the installation of a profile that tells Apple’s servers that the iPhone or iPad in question is available for beta software, and it’s super easy to set up and run. But some may still prefer to do these things the old fashioned way, using a Mac. And this is where the problem could start.

We have already come across a few people who have attempted to install iOS 10 beta 1 on their devices using iTunes restore method only to be treated to an error message. Or Error 14, to be precise.

At this point iTunes refuses to carry on and the user is left with a device that won’t boot – stuck in limbo between iOS 9 and iOS 10. That’s no way to live!

As it turns out, the fix is very simple indeed and anyone who read the Apple release notes for iOS 10’s beta release will already know exactly where people have been going wrong. As it turns out, anyone wanting to use a IPSW image file for restore to upgrade either an iOS device will need to have the latest beta release of Xcode installed as well, that’s Xcode 8 to be exact.

Thankfully, that’s readily available from the Apple developer portal, but at almost 6GB big, installing it is going to take some time. It might be worth installing it before you try to update, and if it’s too late, at least you know where you went wrong.

And more importantly, how to fix it!