If you’ve been keeping a close eye to the news over the last few days, you’re probably aware of JailbreakMe 3.0, a simple untethered jailbreak that takes advantage of a PDF exploit in Mobile Safari. The wizards in the jailbreak community have engineered a fix that manages to preserve the jailbreak, at the same time as it stops unsuspecting users from launching a harmful PDF and having their devices taken over.

This tweak is simple to apply and requires nothing more than an Internet connection. Just launch Cydia, search for “PDF Patcher 2” and install the first (and, as of the time of this writing, only) result. The only thing you’ll need is a jailbroken iOS 4.3.3 device. 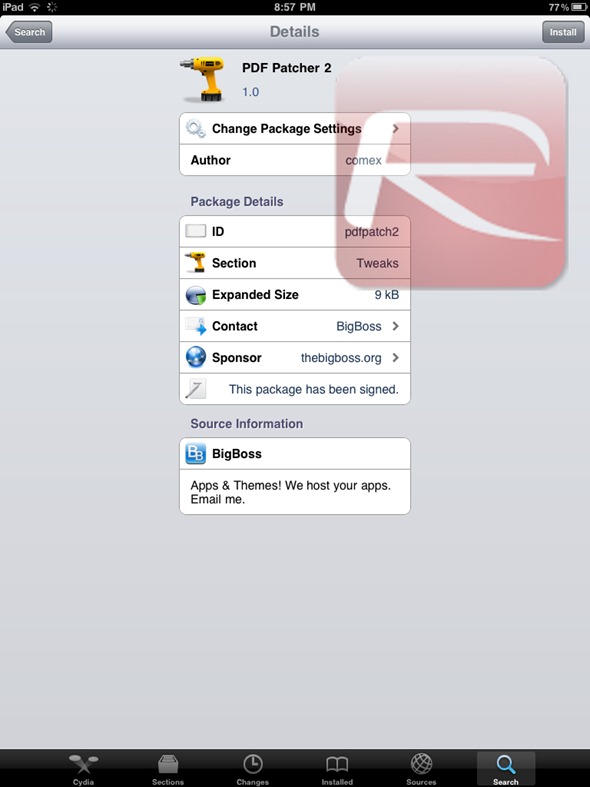 JailbreakMe 3.0 was first unintentionally leaked over the weekend and has since taken the jailbreaking community by storm, since it’s the first untethered jailbreaking solution for the iPad 2, although it also works with any iPod touch or iPhone. Unlike other tethered solutions, JailbreakMe doesn’t require the device to be plugged in, in order to be booted into a jailbroken state. The official version was then released to the public a few hours ago.

In order to mitigate this issue, Apple is said to be working around the clock to release iOS 4.3.4, a final update for iOS 4 before the final version of iOS 5 drops this fall. While the latter is a great priority for Apple, the company feels that a fix for the PDF exploit just can’t wait, since many customers would otherwise be left at risk. It’s important to remember that although the vulnerability is used by a very well-known jailbreaking tool, it can also be used to compromise the security of many users. Yet, it’s advisable that you skip iOS 4.3.4 and install PDF Patcher instead, since it has the same effect, yet it preserves your jailbreak.

Similarly to previous versions of JailbreakMe, this new version requires little to none iOS skills, or a computer connection. Those intending to jailbreak their devices simply need to launch Mobile Safari and point it to JailbreakMe.com. Within a few minutes, the device will be fully jailbroken.

You can now be confident that you’ll be safe from this nasty exploit and still maintain your jailbreak. With this fix, you can skip iOS 4.3.4 altogether, if it indeed becomes available.

You can find out how to jailbreak your iPhone and iPod touch using JailbreakMe 3.0 here, as well as your iPad here.