Fitbit has announced the latest edition to its wearables lineup at CES 2016 today. The new Fitbit Blaze like other items that the company manufactures and markets, will focus on tracking activity, providing intelligent notifications including those from your phone, directly to the comfort of your wrist. The Blaze however builds on the successes of Fitbit’s previously released wearables and takes things a little further.

First and foremost, the Fitbit Blaze is the first of Fitbit’s fitness-centric wearable products to come equipped with a full color LCD display with integrated touchscreen technology. That level of integration may seem familiar to those with smartwatches like the Apple Watch or similar, but it’s a first for those who love what Fitbit has been doing in the fitness space over the last few years. It also means that the Blaze is now able to afford the user with the ability to not only get notifications, but also to interact with them directly on the device along with other activity features. 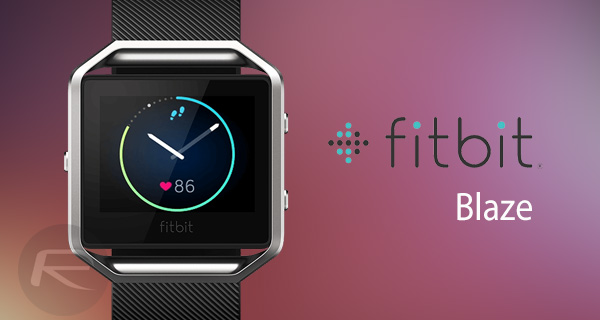 Fitbit appears to have also taken a leaf out of Apple’s playbook by offering some serious customization options. One of the reasons why the Apple Watch has been so successful is the fact that Apple provides bands of varying styles that can be swapped in and out of the main Apple Watch case when necessary to suit a personal style choice. The Fitbit Blaze mimics that by allowing users to alternate between different bands and styles that fit in more with their own personality.

Fitbit is offering the ‘Luxe’ category of bands which include Black Leather, Camel Leather, Mist Grey Leather, and Stainless Steel Link bands. Or if you want durability you can check out the ‘Classic’ offering, which includes synthetic bands in shades of Black, Blue, and Plum.

However, that is where the similarities and enhancements end. There are no third-party app installations and no real ability to extend the Blaze beyond what Fitbit has in mind for it, but Fitbit fans are not going to be bothered much by that. Like earlier fitness tracking wearables from the company, the Blaze will seamlessly track daily sleep, steps taken throughout the day, calories burnt, and all exercise undertaken by automatically kicking into relevant modes thanks to the “SmartTrack” feature. All of this information will be collated and synchronized with the Fitbit app for iOS, Android, and Windows Phone platforms.

Unlike all of Fitbit’s other wearables, the Blaze will also include FitStar workouts that exist to guide the user through an exercise with step-by-step instructions. However, the Blaze lacks an embedded GPS, but that can be overcome with a paired smartphone.

With an estimated five days of battery life, and sizing options of small, large, and extra large, the Fitbit Blaze can be pre-ordered immediately for $199.95 in a choice of Black, Blue, or Plum finishes. The Leather Band + Frame will cost you $99.95 a piece, while the Metal Links + Frame in stainless steel color will set you back $129.95. The choice of Classic Band however, is a cheaper option at just $29.95.