If you can’t seem to decide between iOS, Android, BlackBerry or Windows Phone, then worry not, when 2013 comes around there will be another new kid on the block in the form of Mozilla’s Firefox OS. Although the company has been seeding early builds of the operating system to developers since summer and actually introduced it to the world during Mobile World Congress, there is little that we actually know about it.

It’s difficult to imagine any other new mobile operating system being released which actually makes a significant impact on the current market. With the power and versatility of the Android OS and Apple’s excellent marriage of hardware and their iOS firmware, as well as Microsoft’s Windows Phone hanging around in the background, it remains to be seen how Firefox OS will actually hit the ground running, but I for one hope it brings some awesome features to consumers and breeds innovation in the competition.

It’s pretty much widely accepted that although we require our mobile operating systems to be powerful, versatile and feature-packed, it is also extremely important to have the correct visuals and user-interface that encourages a positive user-experience. Mobile OSes that are used to power advanced touch-screen hardware are all about user interaction, and although we haven’t yet seen too much of what Mozilla is planning, we are hoping that this nice little leak of some images that show the Firefox OS marketplace is a sign of things to come. 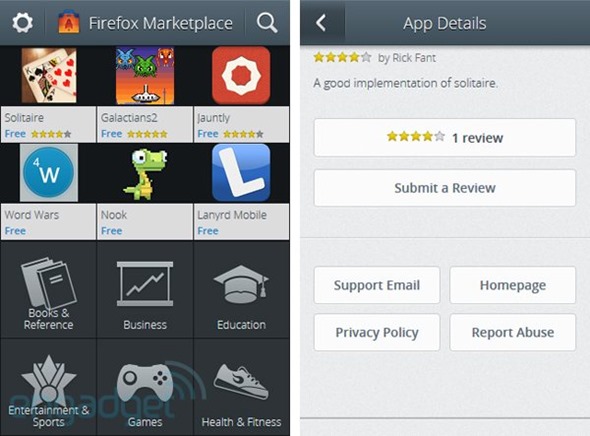 It goes without saying that any mobile operating system that intends to compete in the hotly contested smartphone market space will require a native app store that allows users to download and install third-party developer creations. The leaked images give us our first view of what looks like a pretty much complete and very polished marketplace. Although the layout is different from what Apple’s iOS App Store or Google’s Play Store has to offer, the underlying navigation concepts seem to be the same.

Expected features like the ability to search through the apps is present, as well as easily being able to drill down in specific categories and view the apps within them. It appears that each app has its own page that allows users to view reviews of the product, as well as handling administrative tasks like read the company’s privacy policy or contact the developer directly for support. With the first Firefox OS-based devices set to go on sale next year, let’s hope the rest of the software comes out as nice as the marketplace looks.