Yesterday, we reported that Peter Hajas, the head developer of MobileNotifier would be stepping down. Now, one day later, we’re seeing the last ever release from him: MobileNotifier Beta 5.

I’m presenting the final release of MobileNotifier that I’ll have a part in before my absence. 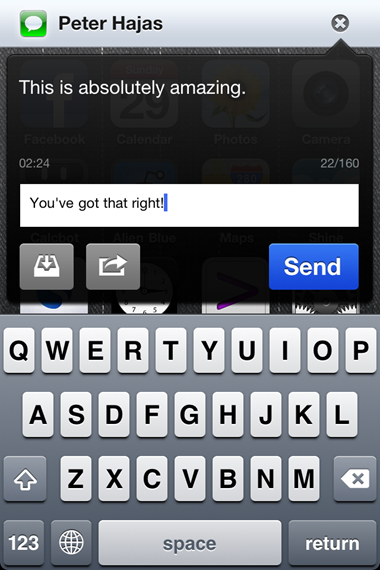 If you’re not yet aware, MobileNotifier is an iOS mod released earlier this year, which replaces the iPhone’s standard push notifications. It has been under a month since Beta 4 was released, and today, Beta 5 is out the gate. According to the Hajas, this is the most comprehensive update since the mod’s inception. It includes several bug fixes and performance boosts, as well as several major new features.

One of the main uses of MobileNotifier has been to display SMS messages as they arrive. But before this release, there was no way to reply to them easily without opening the SMS App. Starting with Beta 5, users can now tap on the "New SMS" notification and reply to the message immediately, saving quite a lot of precious time.

There are also several user interface changes, the biggest and more prominent of which being a new Dashboard, with a new look and better alert management: users are now able to delete all notifications with a "Clear All" button. Notification pop-ups now have an "X" button as well, allowing users to simply tap it to dismiss the notification forever and not have it queue up on the dashboard. 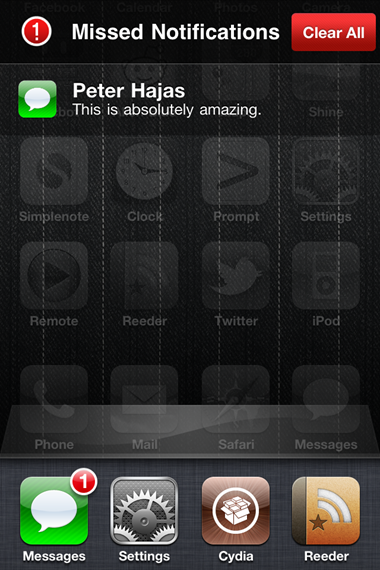 Peter Hajas has published a demo video with additional details:

This tweak can be downloaded from Peter Hajas’ Cydia repository, phajas.xen.prgmr.com/repo.

This comes one day after Hajas abruptly resigned from the MobileNotifier development team. Since then, many have speculated that he might be now working for Apple.

UPDATE 1: Our own video demo is now up!