Final Version Of iOS 10.3.3 Vs iOS 10.3.2 Benchmarks And Performance Comparison 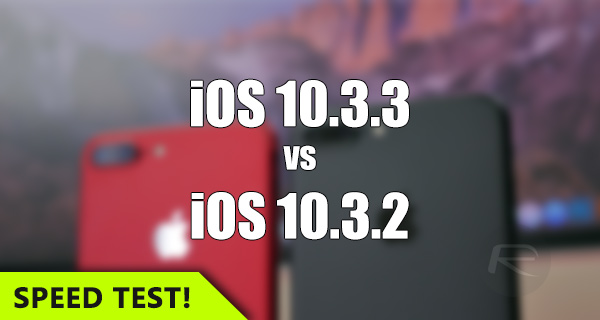 With Apple now pushing out iOS 10.3.3 to the general public, which incidentally contains a relatively important security update to patch an issue with the device’s WiFi chip, it means another opportunity for iAppleBytes to load up iOS 10.3.2 and iOS 10.3.3 on an array of devices to find out exactly what has changed and if there are any notable speed improvements with the latest release. As is generally the case with these types of videos, they follow a very similar path which involves loading up two devices of the same type with the two different versions of iOS and actually seeing which one is quickest and smoothest in an array of tests.

These tests are designed to try and best replicate things that an actual user would care about in the real world, such as checking how quickly each device boots up from a cold start to the lock screen, how fast each app launches from a cold start, and even how efficient and performant it is when interacting with data and content, such as images and scrolling text. Not exactly scientific, but good enough to show a comparison between final versions of both iOS 10.3.2 and iOS 10.3.3.

The good news is that Apple hasn’t taken any noticeable steps backward with iOS 10.3.3. That’s always the fear when a new release is brought out which contains security patches. Users generally fear that other areas may have been overlooked or negatively impacted in the rush to get a security patch into the hands of users. That doesn’t appear to be the case here with iOS 10.3.3 loading up slightly faster on most devices, and even pipping iOS 10.3.2 in the app load and interaction test, especially on older hardware such as Apple’s iPhone 5 and iPhone 5s.

Check out the videos for yourself and see exactly how iOS 10.3.3 performs on the device that you have. If you’ve been sitting on the fence about whether or not to instantly install it to the device, then this could be the push that you need to get that download happening.