Fancy Turning Your Skin Into A Touchscreen For Your Watch? This Tech Makes It Possible

Just when you think you’ve seen it all, and you start to wonder about the direction of future technology and where the innovation is going to come from, the Future Interfaces Group out of Carnegie Mellon University pops up to blow your mind. As part of research into trying to solve the problem of how to efficiently interact with the very small screen of a smartwatch, the group has unveiled a rather impressive interaction solution that demonstrates a method of using the skin on arm as a touchscreen to interact with a smartwatch.

Being able to control and interact with content on a smartphone or tablet is a fairly easy challenge to accomplish and overcome. As companies like Samsung and Apple have proved, there is definitely a market for larger screen devices, meaning that users instantly have a larger target area for complex interaction and gesture-based inputs. Unfortunately, given the fact that a smartwatch is as much of a fashion statement as it is a piece of technology, it’s not really possible to adopt the same mindset and simply make the displays bigger and bigger. Step forward SkinTrack as one potential solution to the problem. 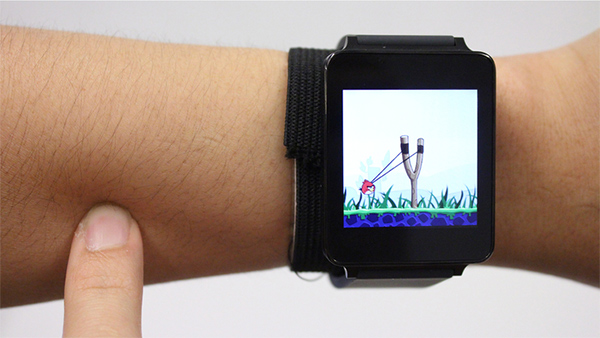 The SkinTrack project has resulted in an output that enables continuous touch tracking on the wearer’s skin. The system consists of a ring worn on the finger, producing a continuous high frequency AC signal across the skin. There’s also an accompanying wristband that is embedded with multiple electrodes. Both of these components work together to measure phase differences in order to “compute a 2D finger touch coordinate” which is then transferred to the smartwatch for the action to be taken.

The goal of the project was to create a “compact, non-invasive, low-cost, and low-powered” solution to the issue.

The Future Interfaces Group imagines that this type of technology will ultimately end up shipping with smartwatches of the future, but that will be after a number of the kinks and teething problems have been ironed out. In its current state, it’s very difficult to keep the wearable ring powered up to provide a lasting experience. There’s also a change in sensing behavior over time as the wearer’s skin changes its properties based on sweating and varying hydration levels.

For demo purposes, check out the video embedded below.