If you are one of the estimated 800 million individuals across the globe who have an active Facebook account, then you will of no doubt started noticing some evolutionary changes which are happening to the Social Networking site. One of the biggest changes is the new Timeline feature which offers a radical new way of viewing the history of a specific friend, and has been met by mixed reviews from members.

You may or may not know, but Facebook holds an event every year called f8 (pronounced ‘eff eight’) which takes place in San Francisco and aims to bring together the developers and business leaders who are building the social web. There is always an appearance and speech by company founder Mark Zuckerberg which is then followed by a number of sessions which are dedicated to specific topics. The f8 conference is generally the forum that Facebook uses to announce new features and technologies which they intend to integrate into the website.

The most recent f8 took place in September 2011 and focused for the majority on the companies new products and building social applications, with one of the main topics of coverage being the future of digital music. Users of the Spotify music service will already be aware that Facebook is attempting to integrate the power of music on a deeper level, with all new Spotify accounts requiring the users to also have a Facebook account. The partnership with the Swedish music company is also becoming more evident as updates are starting to appear in the ticker notification area informing us of what users are listening to via Spotify.

The latest advancement within Facebook appears to have taken that to the next level, by letting you engage in a chat conversation with friends whilst listening to the same music at the same time. This has been dubbed the ‘Listen With’ feature, about which the company had this to say:

Look for the music note in the chat sidebar to see which of your friends are listening to music. To listen with a friend, hover over their name, and click the Listen With button. The music will play through the service your friend is using.

When a new song plays, you’ll come along for the ride, discovering new music while your friend DJs for you. 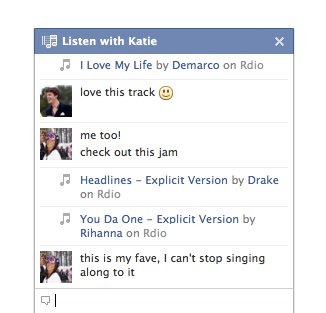 This feature certainly adds a whole new dimension to using Facebook, by effectively letting your friends control your musical journey whilst chatting. This new feature could also go some way to improving users adoption of the Facebook chat service which has recently seen a stand alone windows chat client released.