Facebook Now Allows You To Gift iTunes Credit To Friends

Facebook is the world’s foremost social hunt, and as such, is a great place for people to discover new music, movies and other such content. Sensing this, Mark Zuckerberg’s company has teamed up with Apple to add iTunes digital gift certificates to its roster, and as well as allowing users to buy iTunes Store credit for friends, said user can also make recommendations as to what the recipient should spend that credit on.

The medium of Facebook has long since been a vital tool in remembering somebody’s birthday. No longer do these key dates need to be logged in our brains among the million and one other things on our minds, for the social network gives us a handy reminder, and thanks to recent updates, sending birthday wishes is as easy as one click. But if you want to go a little further than words, Facebook’s new-look Gifts system is your ticket, and with the iTunes Store being an already immensely-popular service for the gift voucher market, this collaboration with Facebook – which has over a billion users – seems like a real money-spinner for both parties involved.

Not only is iTunes the most popular, but its level of content has grown to incredible levels in recent years, and having recently secured the rights to AC/DC’s catalog – the last big-name artist missing from the iTunes Store’s portfolio – music fans in particular have a ready-made gift to send to friends or relatives.

The Gifts arrive in $10, $15, $25, or $50 amounts, and as with all gift cards, can be spent on any content, including apps, games, eBooks, and movies. It’s unknown how the revenue between two of tech’s largest companies will be split, although Apple’s 30% taxation will likely repeat itself once again here. 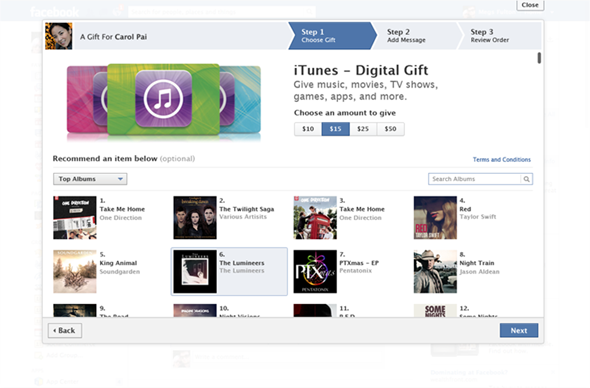 Apple and Facebook’s allegiance has increased over the past few months, with Facebook’s deep integration into iOS 6 following the same treatment with Twitter on the previous Apple firmware version.

This is Facebook’s second bite of the e-commerce cherry. Previous "Gifts" consisted of virtual items, which seemed a bit of a rip-off, but with real products now available to give and receive, it looks as though efforts to further monetize Facebook are moving along swimmingly.