Facebook Gifts Lets You Send Real Gifts To Your Friends

Since the much-publicized IPO earlier this year, Facebook has worked tirelessly to improve its range of products and, most notably, monetize the huge mobile reach it currently possesses. A large chunk of the social network’s 900+ million users login using their smartphones and tablets, but Mark Zuckerberg’s company has, as yet, failed to turn those numbers into cold, hard cash.

Starting with the basics, Facebook has made its famously hit-and-miss mobile app a lot more stable and slick – on all platforms – and among the various acquisitions Facebook has made over the past couple of months, the purchase of social gifting app Karma has stood out as a potential remedy to the company’s mobile revenue woes. 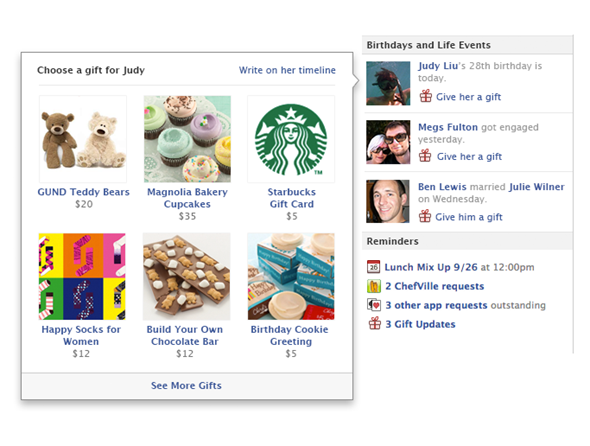 Now if you cast your mind back, you may remember Facebook having its own gifting infrastructure, which allowed users to send virtual goods as presents for Christmas, Birthdays, and other celebrations. Like quite a few of Facebook’s implementations, it was quietly removed, and it’s not hard to see why.

Expecting consumers to pay money for a birthday cake they can’t even eat? The idea was somewhat baffling, but now the Karma purchase has brought about a Facebook Gifts service with a twist – one can actually send and receive real gifts! 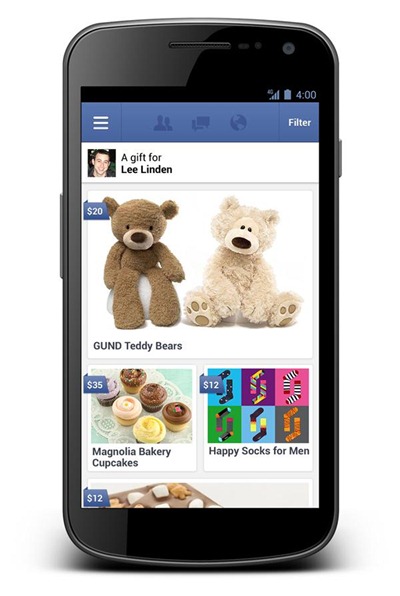 A whole bunch of companies have keenly hopped aboard the idea, including Starbucks (which doesn’t seem to miss any branding opportunity), as well as merchants of sweets, socks, chocolate, cakes, and other novelty items ideal for celebratory purposes. Not sure about you, but I think a Starbucks gift card is pretty suggestive, seeing as most of the coffee chain’s outlets are filled by try-hard MacBook owners, my guess is the social networking folk will opt for a teddy bear, or a cupcake perhaps.

With in excess of 100 retailers preparing for the launch of Facebook Gifts, it will present a great chance for the world’s foremost social hunt to make some money on mobile. Recipients can be notified when a gift has arrived, which is a nice touch, and the feature will begin rolling out over the next couple of weeks.

Although it’s probably too early to tell, I can’t see this feature being anything more than a success, and it’s hard to believe a proper gifting implementation hasn’t been made sooner.

To learn more about Facebook Gifts, simply point your browser to this link: Facebook.com/Gifts