Just when you didn’t think Facebook could grow any bigger, Mark Zuckerberg’s brainchild is on the verge of hitting the 700 million user mark according to Facebook stat monitoring web site Socialbakers.

When a social network gets to such an unfathomable number of users, you have to start wondering just where the new people are coming from, and according to the stats, it’s not from where you’d expect.

According to Socialbakers’ stats, the biggest growth comes from developing countries such as Brazil, India and Colombia with Facebook’s home country of the United States not figuring in the top 20 countries to see Facebook growth. Presumably, the whole of the US is already happily sat tagging each other in photos and trading imaginary crops for equally imaginary gold!

Brazilians already heavily use Facebook competitor Orkut. While it’s not yet known whether Facebook is stealing users from Orkut or not, we have to wonder if there is enough room for three large networking sites in the country when Twitter is added to the equation. 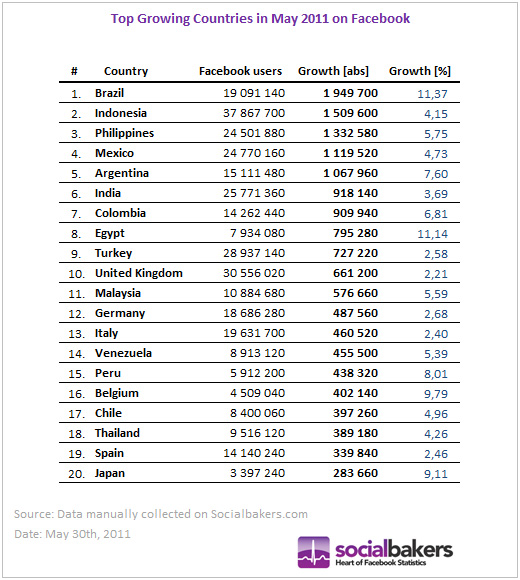 Top growing country in the last month was Brazil with more than 1,9 million of new users on Facebook. This is a huge growth of more than 11 %!

2nd placed Indonesia also saw impressive growth in the number of Facebook users with 1.5m new users joining the social networking giant in the month of May.

Facebook’s rapid growth shows no sign of slowing, and whether you love or hate him, you really do have to admit that the house that Zuckerberg built shows now sign of beginning to crumble just yet.