End Of An Era: Winamp Media Player Is Officially Shutting Down

If you were around the Internet back in the late 90s or early 2000s then Winamp will no doubt be a name that you’re very familiar with. Once the go-to media player of the early generations of MP3 users, Winamp grew big enough and quickly enough to get the attentions of AOL, who paid a not inconsiderably $80 million for it back in 1999.

The problem is that since that acquisition went through the AOL management teams have been systematically taking Winamp’s popularity and ripping it up, with the media player now a fair way down the pecking order that sees apps and services like Apple’s iTunes lead the way.

Now, in what feels like a move that was almost inevitable, AOL has announced that it will be shutting down Winamp.com and removing the once popular Winamp media player from circulation for good. If you want to be able to use Winamp moving forward, we suggest you get the latest build downloaded before December 20th when everything goes away for good.

Winamp.com and associated Web services will no longer be available past December 20, 2013. Additionally, the Winamp media player will no longer be available for download. Please download the latest version before that date. See release notes for latest improvements to this last release. Thanks for supporting the Winamp community for over 15 years.

Those are the sad – or rather depressing words – on the download page of Winamp as of now. 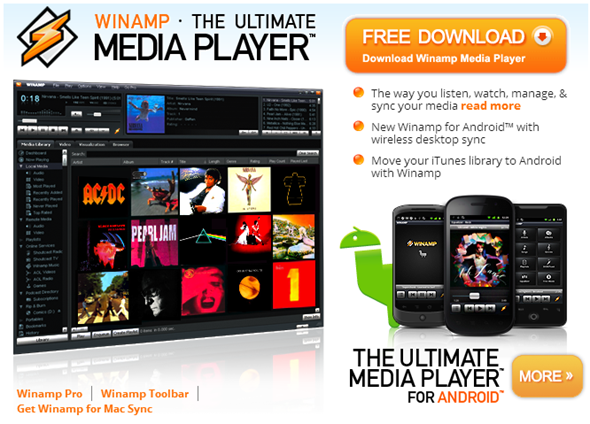 It’s a sad day for those of us that were around when Winamp was one of the first things we installed on a new machine, but that being said we have to admit to not having use the app for some considerable time. In a day and age where not only does iTunes provide most of the functionality that people require, as well as giving them somewhere to buy their music in the first place, the niche for apps like Winamp just continues to get smaller. Throw streaming services such as Spotify and Rdio into the mix, and it’s not difficult to see where it all went wrong for Winamp.

We’re off to browse some of the worst Winamp skins we can find as a sort of homage to better times. Join us, won’t you?