Many of us appreciate, even rely upon the hardcore techies of the hacking community to deliver the tweaks and mods that circumvent the limitations and help us realize the true potential of the devices we own. Whether it’s rooting the HTC Desire or jailbreaking the iPad 2 (or hacking the PS3, which can land you in a whole lot of trouble if you aren’t careful), no sooner are the firmware versions or devices released than the developers are beavering away looking for exploits in the system.

Map and navigation apps have resigned the old paper maps to ancient history. When Google Maps for Android was initially hacked to allow the use of turn-by-turn navigation in unsupported countries, the Googlers hastily released an update for the app which plugged the loophole. But the resilience of the hackers, moreover one hacker, ‘Brut.all’ meant navigation unlock mods were continually developed and released for the app. An overly busy Brut.all has a group of minions releasing his ‘ownhere’ mod for every Google Maps update that arrives. If you reside in or are visiting a country that Google Maps Navigation does not support, the recently updated step-by-step guide released for the latest (5.7.0) version by said minions outlines the three installation methods which will help you to enjoy a more complete navigation experience. 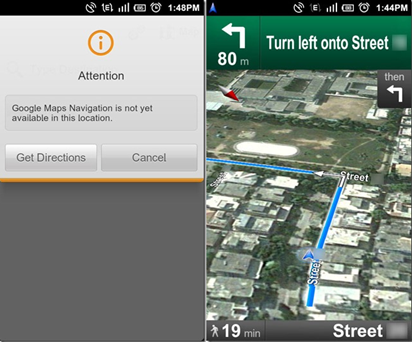 "I have started this project about 1.5 years ago, but I don’t have time recently, so I don’t port my changes to newer versions of Google Maps. Some Chinese guys do that for me 😉" was Brut.all’s foreword on the release.

Installation Instructions (Requires Android 2.1 and up):

There are three methods of installation, please be sure to follow the instructions carefully to avoid any unnecessary problems.

Step 1: Firstly, in Titanium Backup, make a back up of the "Maps" app.
Step 2: After the backup, now select Maps, wipe its data, and then completely uninstall it.
Step 3: Do as above for Street View – wipe data and uninstall.
Step 4: Then install maps 5.7.0-ownhere-testkeyresign.apk (link at the end).
Step 5: And finally, go to the Android market and reinstall Street View.

Required Files (Remember you only require one of the following depending on your chosen installation method).