There’s nothing like the re-release of a classic retro title to prompt a rush of nostalgia, and for those old enough to remember, it has been almost two decades since Duke Nukem 2 first released on MS-DOS. Just before the turn of the millennium, it made its second appearance on Nintendo’s GameBoy Color, and with December marking the iconic title’s twentieth anniversary, another remake has just been released for iOS before being teased back in March. Mode details and download link after the break.

There have been plenty of teasers for the iPhone, iPad and iPod touch release just recently, but finally, today is the day it becomes official. Published by Interceptor Entertainment, you’ll get to relive each of the original 32 level journey, but thanks to the significant technological advances of the past twenty years, it will be an even richer and smoother experience than before. Aesthetically, it looks incredibly sharp thanks to some “Insane” VGA Graphics, and with touch screen optimization, it shouldn’t take you too long to refresh memory and leap straight into the action. 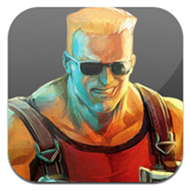 Initially, these old game remakes struggled to emulate the experiences we cherished from old computers and consoles, with developers having difficulty in adapting titles to the touch interface. Things have changed in the past couple of years, though, and Duke Nukem 2 is just the latest in a long list of remakes to run like a dream on the smartphone and tablet.

If you’ve ever played a video game involving shots being fired, you really ought to know what Duke Nukem is about, but for the uninitiated, perhaps a little background information is in order. Duke Nukem 2 is one of the original shoot-’em-up titles, and to pass through levels, you have to climb ladders, jump from platforms, teleport, and shimmy across pipes while blasting enemies and picking up items along the way.

So, if you want to take a trip back to the early nineties, Duke Nukem 2 has been lovingly remastered as it were, and costs just $1.99. Also, since it’s universal, you only pay the fee once, and you can then enjoy it on any iOS device.