Readers of a certain age will remember Duke Nukem from before it became the laughing stock of the gaming world. Following a huge delay of Duke Nukem Forever that saw it skip at least one console generation, the game finally made it onto shelves only to be universally panned by critics and gamers alike.

The earlier games were, if memory serves, absolutely epic. That’s why we’re super excited to hear that iOS (on both iPhone and iPad) is set to get its second Duke Nukem game, following on from the already available Duke Nukem 3D.

From the Official YouTube channel of the developer Interceptor Entertainment:

The King of Side-Scrollers is Back for its 20th Anniversary, on iOS! 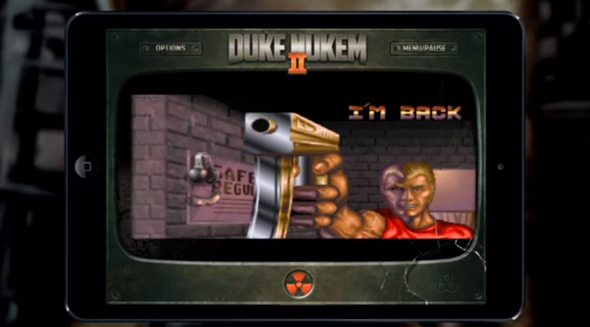 The title winging its way to iOS is Duke Nukem 2, with the side-scrolling shooter set to be released in April, according to the game’s developers. 3D Realms and Interceptor Entertainment are apparently working on bringing the original 32 levels to the iOS platform, along with new music and obviously enough, touch screen support. The developer claims the game will cost just $1.99 when it does reach the App Store next month which sounds like an absolute steal to us!

For those that fancy a trip down memory lane, or for those that are just too young to know why us oldies are so in love with Duke Nukem, there’s a promotional trailer of what we can expect when Duke makes is way to Apple’s mobile platform, too, which is embedded at the bottom of this post.

The iPad and iPhone have played host to all manner of classic games, with Sonic one of our personal favorites. If someone had told us twenty years ago that we’d be playing our favorite PC and console games on a smartphone, we’d have called them a liar. Not least because smartphones didn’t really exist back then, but you know what we mean!

What we’d really like to see reach iOS though is Mario, but until Nintendo comes to its senses and gets out of the home console hardware game, then we all know that’s not very likely to happen. Mario 64 on an iPad mini? We’d be all over that in a flash!