Being able to install multiple operating systems on a desktop computer is something we just assume as standard. Running Linux alongside a Windows installation on a PC is an everyday experience for millions of users around the world. Installing Windows 7 or Windows 8 as a dual-boot operating system on a Mac is actually extremely commonplace as well. Although mobile platforms have benefited from significant growth in the last few years, and continue to grow, we’ve never really had a truly functioning dual-boot system that has been adopted by the masses. For those that may have heard of, and used, the MultiROM booting system on Android you may be pleased to hear that the development team have released a new version with support for additional hardware.

A quick recap of the MultiROM offering: the software essentially allows Android users running a Google Nexus 7 tablet to boot into one of many installed Android ROMs installed on their device. The solution was favored by most due to its relative simplicity when compared against other options that purported to offer the same functionality. One of the main appeals of the MultiROM solution is that it didn’t actually require any modification or changes to be made by the user to the device’s bootloader or /system partition. That is definitely an appealing characteristic for those that may not have the greatest grip of the Android file structure.

The MultiROM software didn’t make the whole experience hassle and pain-free but it certainly made switching between ROMs a lot more elegant for Nexus 7 users. The good news is that the development team has been beavering away on the software and has released new versions that will offering the ROM switching experience on the 2013 Nexus 7 as well as the fantastic Nexus 4 smartphone. Support for last year’s Nexus 7 is still being offered. In addition to supporting the extra hardware, MultiROM also comes with a few additional power-ups. 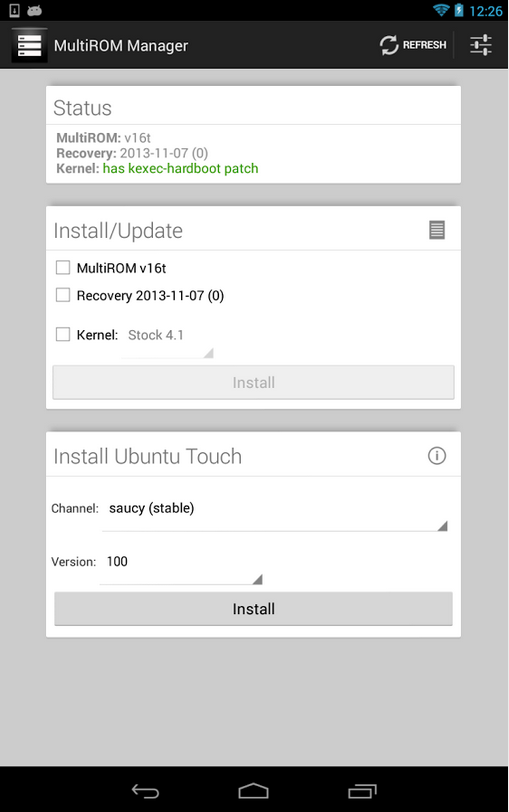 One of the previous limitations of the software has been removed with this latest build. The previous iteration required that ROMs were installed on internal memory on the device, which proved problematic for a number of users. This is no longer the case with the current release of MultiROM. Users will also have the option of restoring from a Nandroid backup to be used as a secondary ROM on the device. It’s great to see this extremely useful tool evolving and even better to see the development team recognizing the needs of their users and improving the experience as well as adding additional power.

If you want to jump in on the action, visit the thread over at XDA-Developers for Nexus 7 2013 here, and Nexus 4 here.