Apple has today released the final versions of watchOS 3.2.2 and tvOS 10.2.1 for download, meaning that all public holders of an Apple Watch or third-generation Apple TV can act immediately to download and install the latest firmware.

After initially going through a prolonged beta test, which has involved a number of pre-release seeds issued to those registered with the Apple Developer Program, Apple has now deemed that both versions of the respective platforms are complete, and therefore ready for a public release. 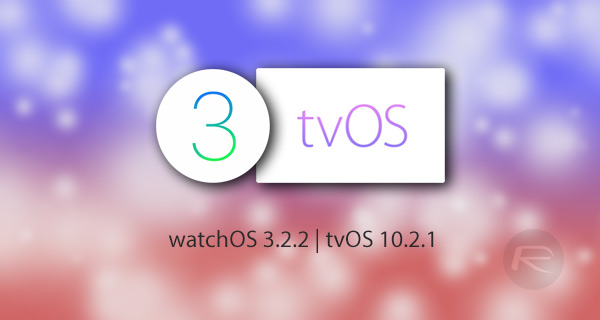 Given the minor point release of both platforms, users are unlikely to be showered with an array of new features, but rather provided with a platform that enables a more streamlined experience across all compatible devices.

As you might expect, Apple hasn’t introduced any large wholesale changes with the introduction of watchOS 3.2.2. This particular release focuses on internal improvements and bug fixes and improvements, with the hope of introducing additional stability across all Apple Watch models. This release, of course, not only follows hot on the heels of Apple’s previous watchOS release but also sets the scene for what it likely to be released when any announcements are made during next month’s Worldwide Developers Conference.

Anyone with an Apple Watch can download the latest watchOS 3.2.2 right now via the Update section of the connected iOS Watch app. The Apple Watch will need at least 50-percent battery life, and to be connected to a power source during the download and installation.

For detailed instructions on how to install the update, head over to our guide here: How To Install watchOS Update On Apple Watch [Tutorial].

Given that this release is the definition of a minor point release, there isn’t much change going on with this one. Apple has taken its usual tried and tested route of not giving away much information during the initial betas, instead allowing developers to find out exactly what is included for themselves. Rather than offering up any wholesale changes, including the introduction of outward-facing features, Apple has used tvOS 10.2.1 as an opportunity to fix bugs, introduce stability improvements, and ensure that all Apple TVs are running as smoothly as possible. It’s likely that this release will set the scene for tvOS 11 this coming June.

Those with a fourth-generation Apple TV can instantly head on over to the Software Update section in the Settings app to download the OTA update, and have tvOS 10.2.1 installed right now. Detailed instructions on how to install the tvOS 10.2.1 update on the Apple TV can be found here: How To Install tvOS OTA Update On Apple TV 4.