Apple has released final versions of watchOS 3.1 and tvOS 10.0.1 for download on the Apple Watch and Apple TV 4 respectively. Here’s everything you need to know.

watchOS 3.1 and tvOS 10.0.1 have been in development for some time now with Apple having pushed out 3 pre-release seeds of watchOS 3.1 and 4 betas of tvOS 10.0.1. The latest versions of both of Apple’s platform gives us a good idea of the company’s commitment towards progressing the Apple Watch and the entirely-new Apple TV experience to new heights. 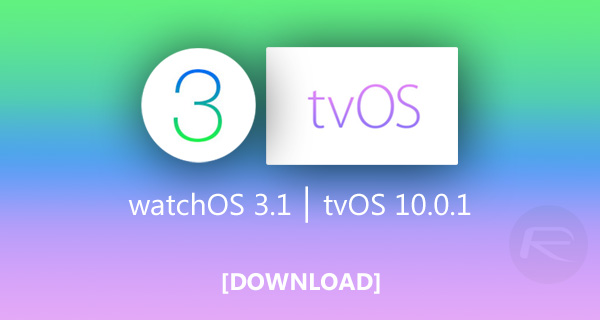 It’s always great to receive a software update for any particular piece of hardware, mainly because it’s great to be able to see the changelog and actually interact with any new features or improvements. Sadly, in this instance, Apple doesn’t appear to have been overly generous with new features in watchOS 3.1, meaning that it appears to be more of an evolutionary update designed to offer bug fixes and stability improvements that should provide a more fluid experience for all Apple Watch owners than anything else. As we are used to seeing from Apple, the next major point release after a major firmware revision is generally there to stabilize and fix any bugs that may have been identified with the earlier launch.

The latest watchOS can be downloaded over-the-air by Apple Watch owners using the update mechanism found in the Watch app on iPhones running iOS 10. Before updating, make sure that Apple Watch is charged up to at least 50% or plugged into a power source.

Detailed instructions on how to go about installing the update can be found here: How To Install watchOS Update On Apple Watch [Tutorial].

Like the majority of Apple’s software releases over the last few weeks, and certainly within the foreseeable, this launch is about the progression of the Apple TV platform to benefit those fourth-generation Apple TV owners.

The main improvement expected to be in this release was the introduction of single sign-on. This feature was previously assumed to make it into tvOS 10.0, but didn’t, and neither it has in tvOS 10.0.1.

All you have in this release is yet another release containing bug fixes and stability improvements that look to enhance the overall tvOS 10 proposition, and of course, push the Apple TV platform forward in the hope of driving more sales through the marriage of hardware and software.

Apple TV owners should be able to update software on the device directly via the Software Update mechanism. Details on how to go about doing that can be found here: How To Install tvOS OTA Update On Apple TV 4.