Apple has today released beta 2 download of watchOS 3.1 and tvOS 10.0.1 to developers. Following hot on the heels of the original betas released two weeks ago to those enrolled on the company’s Developer Program, today sees tvOS 10.0.1 beta 2 and watchOS 3.1 beta 2 being made available for interaction and consumption on the Apple TV and Apple Watch.

If you’re a developer with an interest in helping shape the future of the platform, make sure to get them both downloaded and installed right now. 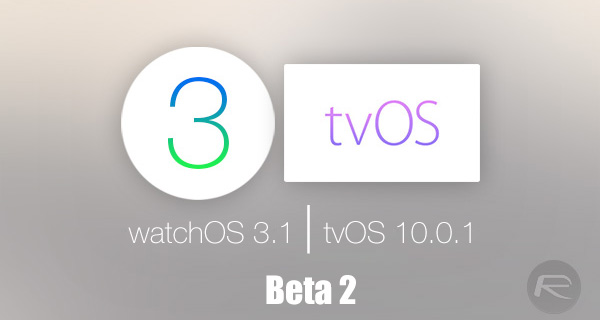 One of Apple’s most exciting product lines, the Apple Watch, powered by watchOS, is now sitting at version 3.1 with developers. With the initial version of watchOS 3.1 released to developers last week, Apple has yet again signaled its intention to progress the platform forward in an as timely a manner as possible. As with the first available beta issued last week, watchOS 3.1 beta 2 focuses predominantly on streamlining the experience via the Apple Watch by eradicating bugs and enhancing performance where possible. This latest watchOS beta is immediately available for developers to download via the accompanying Watch app on the iPhone.

Be sure to have at least 50-percent battery on your Apple Watch, or ensure that it’s connected to a power source while updating. Oh and of course, you need to be running iOS 10 on the paired iPhone.

tvOS is not only an extremely interesting platform and proposition for consumers, but also for Apple as a company as it powers one of the company’s most immature product lines, the fourth-generation Apple TV. In a similar fashion to tvOS 10.0.1 beta 1 that was seeded last week, today’s beta 2 seed doesn’t look to contain any additional outward-facing changes or additional feature additions that enhance the tvOS prospect. Instead, as you would expect from a point release of this nature, Apple has focused on introducing bug fixes and making enhancements where necessary to provide a better and more polished experience.

Apple TV owners, who are also registered as developers, can grab the latest update and will need to install it via a USB-C to USB-A cable on a computer via iTunes. Of course, if there’s a beta build already installed on the device, then the update can be installed as an over-the-air download via the Settings menu from Apple TV itself.

As always, if any feature additions or changes are discovered in the latest releases, we will look to bring these directly to your attention immediately.