One of the great things about having devices like smartphones and tablets is the ability to constantly update the standard functionality of the gadget by downloading and installing additional apps which are available through marketplaces like the iOS App Store and Google’s own software market, the Google Play Store. In some instances it is possible to acquire installations from other sources, but for the mainstream user, the official app hubs prove more than sufficient with over 1.2 million combined apps available on the two largest sales platforms.

I am one of the few people who actually feels a shudder of excitement when I open the iOS App Store or get a notification on my Nexus 7 that tells me I have an update waiting to download for certain apps. It’s always nice to delve into the attached changelog and see what new features the developers are about to offer us. In this instance, it isn’t actually an update to a third-party app for Android users, but an actual update to the Google Play Store itself.

Google is pushing out periodic updates to Android devices that updates their own app hub to version 3.7.15, but before we all go excited about some amazing new feature that is being added, it is worth noting that this update appears to be of an evolutionary nature that brings the obligatory speed improvements and reliability enhancements. Still, it would possibly be pretty greedy of us to expect a sizeable push at this time considering the recent update of Google Play brought the ability to purchase TV shows and magazine subscriptions.

Just because Google haven’t seen fit to pack version 3.7.15 with additional functionality doesn’t mean that the update isn’t important to certain users. When a platform or app seems to be working fine and flawlessly for us, it is generally the case that a certain subset of users are experiencing issues for one reason or another, with this being particularly true for United States-based Sprint users who have been known to receive specific error messages. This latest version of the software, although mysterious in its entire feature set, does seem to be removing those errors when downloading over the 4G network. 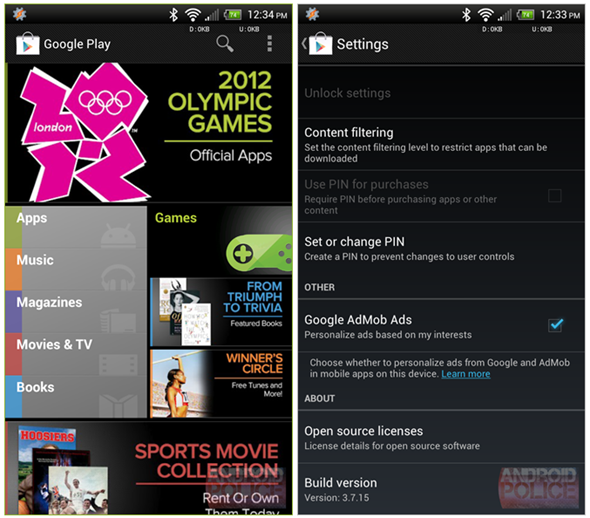 As is usually the case with things of this nature, the APK installation file for the new version of the Google Play Store has already been extracted and made available for installation to those who simply can’t wait to get their hands on it. Simply download the file from the source link below and make sure that app installs from Unknown Sources are allowed on the device.