Final version of Firefox 8 has made it to the Mozilla ftp servers, and brings amongst other things, speed and performance enhancements. It is largely regarded that this release resembles the end-user version – set to be released to public on November 8th.

Firefox is considered to be one of the internet’s "good guys", promoting open-source software and generally improving the browsing experience as a whole. In its early days, it was widely lauded as the cream of the crop, fending off the relatively weak challenge of Microsoft’s Internet Explorer.

Times have changed now, though. Google’s Chrome browser is ever ever-increasing in popularity, and the comparatively minuscule Mozilla Foundation is in real danger of being crowded out by the big guns.

The updates have been coming in thick and fast of late, and some have argued that releasing larger version numbers in relatively short spaces of time has only confused consumers. This latest version 8 comes a mere six weeks after the release of version 7, which succeeded version 6 buy little over a month itself. With most software updates, a leap between whole numbers suggests a major revamp, although that hasn’t really been the case with Firefox, which has sped up its release schedule in order to maintain its place amongst the best.

Firefox has prided itself and built its success around being a lag-free, smooth browsing experience, and version 8 continues that tradition. There are a whole host of new handy features for you to mull over, as well as the to be expected array of bug fixes. You can check out the full change log below: 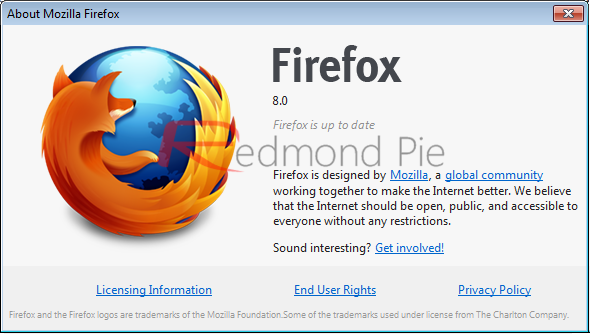 You can download Firefox 8.0 right now from the Mozilla Servers, just select the release specific to your operating system:

What do you think of Firefox’s latest browser? Whether better or worse, smooth or buggy, leave you feedback on our Facebook fanpage!