Remember those Firefox 4.0 mockups which were released recently and showed full Aero Glass support under Windows 7 and Windows Vista? Well SpewBoy from deviantART has released an awesome looking theme for Firefox 3.5 or later which will skin it to make it look like Firefox 4.0 (Firefox 3.7 theme can be downloaded from here) with all the Aero-like transparency effects from Windows 7. Follow the steps below to install the theme: 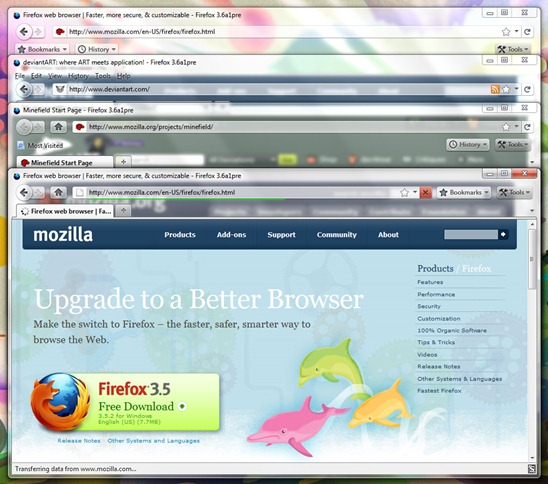 Step 2: Now you can install the theme as usual. To do this, open the addons window and drag the file "strata40_v02.jar" into the window.

Step 3: Go here to download a Firefox addon called Personal Menu. Once you have it installed three new toolbar buttons will appear after the stop / reload button. You can customize these as you wish, or remove them like any other toolbar button.

Step 4 a: This step is for Windows Vista and Windows 7 users only. Go here to download an addon called "All Glass Firefox Mod" (based on Glasser). Once installed it will give everything a nice, glassy, "aero" look, like most Vista or Windows 7 applications (such as IE7/8).

Step 4 b: Install the Firefox addon, Stylish which can be downloaded from here.

Step 4 c: Bundled with the archive containing the theme is a txt file. Open this in any text editor such as Notepad or Wordpad and copy the contents to clipboard. Paste the contents into a blank Stylish style. Name it something like "Strata40 – Glasser Fixes" and make sure it is activated. This will fix up a few things that were overridden by the glass addon.

Step 5: Now download an addon called "Fission". Once this is installed, go back to the archive included and extract the file called loading_progress.png. Put this file somewhere safe, so it won’t be deleted. Go into the "Fission" addon’s options and click "browse" and select the .png file. This will let you have a small loading bar underneath the urlbar, like in Firefox 4.

Step 6: Download this addon to use the urlbar as a search bar too. You may now remove the search bar next to the urlbar.

NOTE for Firefox 3.6 users: You may need to download something called Nightly Tester Tools and use it to over ride the compatibility check of the above addon, as it is only compatible with 3.5.