The second beta instantly means that registered developers have another opportunity to test a number of Apple’s major platforms and put them through their paces. It’s also an opportunity for sole developer testing before Apple releases macOS 10.13 and tvOS 4 into the hands of public testers later this month. 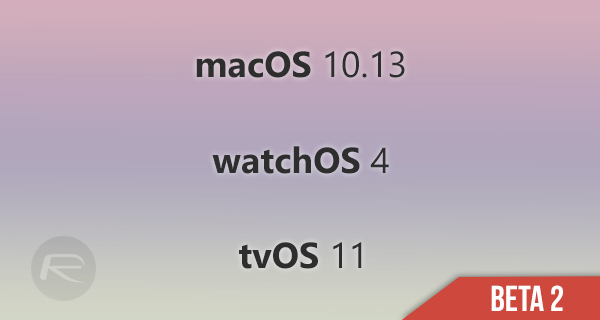 macOS 10.13 High Sierra Beta 2: Apple has officially released the second pre-release seed of macOS 10.13 High Sierra to those lucky individuals who are enrolled and registered with the Apple Developer Program. This update follows on from the initial High Sierra beta pushed out immediately after the opening keynote of WWDC. Anyone looking to take advantage of this second beta will be immediately able to benefit from changes made by Apple to streamline the macOS 10.13 High Sierra experience. Internal changes made will be based on feedback from users as well as Apple’s own roadmap for the platform. Major changes for macOS 10.13 include significant improvements to Safari with the automatic blocking of videos playing as well as a new feature called Intelligent Tracking Prevention.

There are also changes to the Photos app, improvements to how the Mail app works in terms of efficiencies, and iCloud and Siri refinements. Obviously, much, much more is on the table with macOS High Sierra, and this second beta is just the start of that journey.

watchOS 4 Beta 2: watchOS and tvOS are never going to be Apple’s most popular platforms by installation numbers, purely because of the number of devices in existence, but they are still hugely popular. This latest version of watchOS is the fourth major iteration, and definitely the best yet.

Beta 2 of watchOS 4 is offered with immediate availability to all registered developers. This is the second progression of the platform with all included watchOS 4 features, such as the new and improved watch faces, redesigned application experiences, and an improved Siri experience which functions more like its living on a powerful smartphone or tablet.

tvOS 11 Beta 2: tvOS 11 may have dropped off the WWDC radar this time around, but that doesn’t mean that it isn’t here and still being offered for testing purposes. Offered with immediate availability, this latest version of the Apple TV platform comes with significant under-the-hood improvements, including refinements and security patches to ensure that Apple TV is a safe and secure platform to use.

Apple has also included API improvements with tvOS 11 as well as custom sound support. It may not be the overhaul that many people wanted, but it’s definitely an improvement and worthy of testing.

If you’re looking to download and install the developer betas of macOS 10.13 High Sierra, watchOS 4, or tvOS 11, simply head over to developer.apple.com to get started.