To mark the release of Rio 2,which hits theaters on April 11th, the Angry Birds Rio game has just been updated to version 2.0, complete with a brand new episode based loosely on the forthcoming sequel. More than just a casual update, the new episode packs in a total of 26 new levels through which you may test your bird-flinging skills, and whether you’re excited about the second movie or just a big fan of the Angry Birds franchise, this is one release you won’t want to pass up on.

The update has been pushed simultaneously for both iOS and Android, with links to both the App Store and Google Play Store versions provided at the bottom of this article. 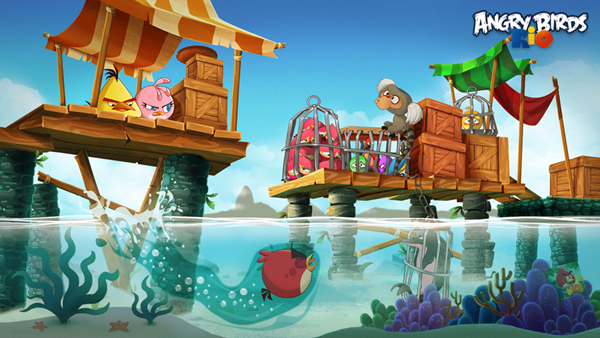 A joint venture between Rovio Entertainment and Blue Sky Studios to commemorate the original Rio animated flick back in 2011, Angry Birds Rio has been downloaded millions of times since its original release, and this update serves as a timely reminder that the next episode is inbound.

With a star-studded cast, the second movie is expected to be another box office hit, and until April arrives, the 26 new levels should provide apt entertainment for Angry Birds and Rio 2 fans alike.

Although I haven’t had a chance to try out this latest update just yet, I have enjoyed many an hour playing Angry Birds Rio in the past, and even though the title has been somewhat upstaged by the likes of Angry Birds Space and Angry Birds Star Wars, this edition is till in my top three, along with the aforementioned.

Angry Birds Rio for Android smartphones and tablets consists of one universal app, although if you’re on Apple’s iOS, there are separate versions for the iPad and the iPhone / iPod touch, so be sure to download the correct one for your iOS device.

The title is absolutely free of charge on both platforms, so go ahead and grab it, and be sure to leave your thoughts and comments below.