Updated to iOS 9 beta? Want to downgrade back to iOS 8.3? Fortunately, you can as Apple’s latest public release iOS 8.3 is being signed, meaning you can downgrade back to the more stable release using iTunes right now.

It is important to note that once you downgrade back to iOS 8.3 from iOS 9, you won’t be able to restore any full device iOS 9 backup you made on iCloud or using iTunes, this is because backups made on iOS 9 are NOT backwards compatible to work on iOS 8. You will either have the choice to restore to a old backup made on iOS 8.x, or start from scratch on iOS 8.3. You’ve been warned. 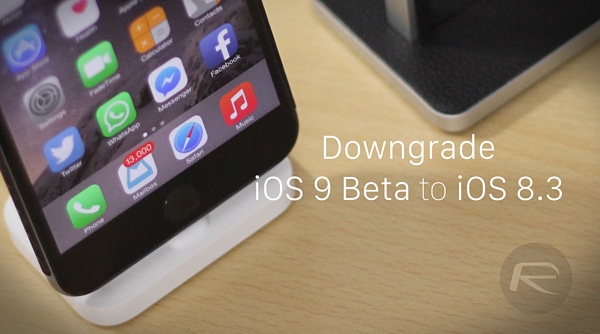 The following tutorial will help you downgrade iOS 9 beta to iOS 8.3 on any iPhone, iPad or iPod touch.

Ready? Lets do it!

Step 1: Update to the latest version of iTunes on Windows or Mac.

Step 2: Download iOS 8.3 for your specific iPhone or iPad model from here.

Step 4: Connect your iOS device to your Mac or Windows PC and launch iTunes.

Step 6: In iTunes hold the Option key on Mac, or the left SHIFT key if you are on Windows and then click on the ‘Restore iPhone…’ button.

Step 7: iTunes will now prompt you to select the IPSW file you want to restore to. Point it to iOS 8.3 firmware file you downloaded for your device in Step 2 above.

Step 8: Now iTunes will start the restore/downgrade process. This may take a while, do not disconnect (read: unplug) your device from your computer at this stage. After a while, your device will reboot right into Hello welcome screen of iOS 8.

Final version of iOS 9 will be released to public this fall alongside iPhone 6s and iPhone 6s Plus.