How To Downgrade iOS 8.3 On Your iPhone Or iPad

Here’s a tutorial on how to downgrade iOS 8.3 on your iPhone, iPad or iPod touch to a older version like iOS 8.2.

Some of us have already updated our iPhones and iPads to iOS 8.3 after the update was rolled out earlier this week. However for those of you looking to roll back to the older iOS 8.2, now would be the time to do it because it’s just that easy. 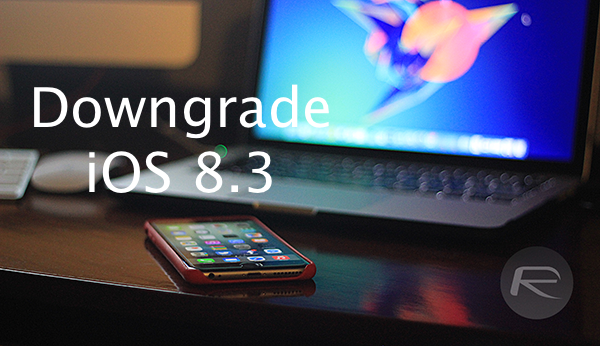 It is important to note that downgrading from iOS 8.3 is only possible because Apple is still signing the iOS 8.2 firmware, but once that signing window is closed – which could be any day now – the downgrade to iOS 8.2 will not be possible.

iOS 8.3 sports a host of improvements and bug fixes over iOS 8.2, and neither of the two versions of Apple’s mobile OS are jailbreakable at this point, so the question is why should anyone be downgrading to iOS 8.2? To break it down, Apple had patched up quite a few exploits in iOS 8.2, but has followed with even more patching of exploits in iOS 8.3 now, making iOS 8.3 jailbreak even more difficult. So in case of TaiG and the likes releasing a jailbreak for anything older than iOS 8.3, this would be useful.

Other than that, downgrading from iOS 8.3 to 8.2 won’t be of much use as iOS 8.3 packs a bunch of bug fixes, performance and battery improvements.

The following steps for downgrading from iOS 8.3 to 8.2 will help you avoid getting caught in cold waters incase an iOS 8.2 jailbreak comes out.

Step 1: First thing’s first; make sure you backup your data like Photos and stuff to iCloud or locally to your PC before downgrading. It is important to note that full Backup option available in iTunes and iCloud won’t work if you try to restore a backup made on iOS 8.3 on an older version like iOS 8.2.

Step 2: Next, download iOS 8.2 firmware file for your device.

Step 4: Now hold down the Option / Alt key on your Mac’s keyboard, Shift key if you are on Windows, and click the Restore iPhone button.

Step 5: You will now be prompted to browse and select the iOS 8.2 IPSW file you downloaded earlier.

Step 6: Select and open the file, which should begin the downgrading / restoring to iOS 8.2 process.

It will take a couple of minutes for the entire process to complete so sit back and watch as your iOS device is rolled back. Once done, you will have successfully installed iOS 8.2 on your device.