The good news in the world of jailbreaking continues to filter through. After Apple stopped digitally signing iOS 8.4.1 via its authentication servers, it effectively became impossible for users on iOS 9 to downgrade to iOS 8.4.1. That meant that if you had moved to iOS 9.0.x and weren’t happy with the decision for one reason or another, and wanted to roll back to the last version of iOS 8, it simply wasn’t possible. The good news is that it is now actually possible, thanks to an updated version of odysseusOTA for specific iOS hardware.

The original introduction of odysseusOTA allowed users running iOS 8 or iOS 7 to downgrade to iOS 6.1.3 without the need for saved SHSH blobs. The first iteration of the increasingly popular tool was able to take advantage of a bug in Apple’s own underlying source code that meant that devices capable of running iOS 5.0.1 were able to benefit from the features that it provided. But times have changed, and most of us, like the jailbreak community, have moved on and are happy with what’s offered on iOS 8 and iOS 9. Hence the updated version. 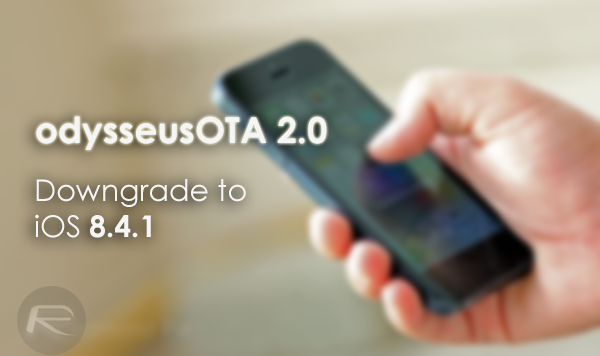 The updated version works a little differently. It supports downgrade on iPhone 5, iPhone 5c, iPhone 4s, iPad 3 and iPad 2 only – from iOS 9.0, 9.0.1, 9.0.2 to iOS 8.4.1. Only these devices are supported because Apple for some strange reason continues to sign OTA blobs for iOS 8.4.1 only for the above mentioned devices. Also, the keys are publicly available for them. odysseusOTA 2.0 also requires an already jailbroken device for the downgrade to take place, which shouldn’t be a problem considering all publicly available versions of iOS 9 as of today are jailbreakable using Pangu.

So, if you’re running jailbroken version of iOS 9, 9.0.1, or 9.0.2 on your device, why exactly would you want to downgrade to a version of iOS that is no longer officially supported and doesn’t have a jailbreak available for it? That’s an excellent question with a number of potential answers. First of all, there’s the age of the supported devices; If you have an iPhone 5, iPhone 5c, iPhone 4s, iPad 2 or iPad 3, then it’s very possible that you could be having performance or battery issues on iOS 9. We recently discussed whether or not a jailbroken device is slower than a stock one, especially on older models, so that could play a huge part in the decision.

There’s also the fact that a jailbreak for iOS 8.4.1 has already been teased. The source code has been made publicly available, and the developer behind the iOS 8.4.1 solution has made it pretty clear that he plans to bring this to the public in the very near future. If the above rings true for you, and you’re regretting the decision to move up to iOS 9, then check out the downgrade video below for instructions on using odysseusOTA 2.0 for a full guide on the process.

Check out the video right below.