The Best Cyber Monday 2015 Deals On iPhone And iPad

It feels like we have been going through a period of elongated financial savings thanks to the ongoing nature of Black Friday and now Cyber Monday. Not that any consumer will actually complain about saving money on things they were intending to buy anyway. Half of the battle is actually fighting through all of the advertising marketing literature to actually weed out the best deals. If you’re on the lookout for a new iPhone or iPad, then we’ve listed a few of the better Cyber Monday deals out there that are up for the grabs right now.

All deals have been sorted according to device, and its models. You can check out the complete list of the deals below. 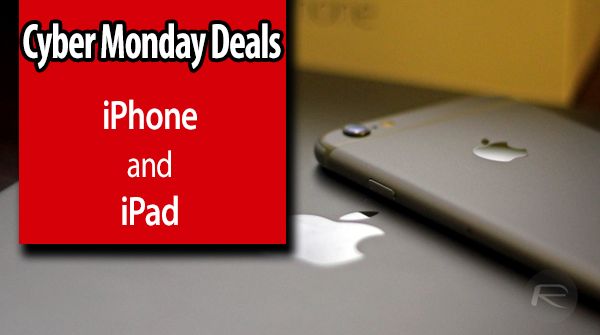 Best Buy has been winning when it comes to Black Friday deals, and it shows no signs of slowing down. If you are in the market for an iPhone 6s or 6s Plus, Best Buy is handing over a $200 gift card if you purchase one on Verizon, Sprint, or AT&T along with the trade-in of an iPhone 5 or newer.

Best Buy is showing the love to the iPhone 6 and 6 Plus as well. Consumers looking to get one of Apple’s 2014 devices can get up and running with a $1 activation fee on a 2-year minimum term contract for the iPhone 6. iPhone 6 Plus deals start at an agreeable $99.99 on a two year deal.

If you’re looking for an iPad and don’t specifically need to have the latest model in your life, then the iPad Air is worth looking at. Best Buy is offering the original iPad Air with a discount of $50, taking the price to $349. This applies to the entry-level 16GB WiFi only model.

Meanwhile, Target is also offering a $100 gift card with the purchase of any iPad Air model or you can go the coupon way by using the code CYBER15 which is actually site wide and isn’t related to a specific product. You can avail either one of the deals of course.

Staples is also offering up to $90 off on select iPad Air models as well.

Apple’s iPad Pro is the newest kid on the iPad block, and as such is bringing a lot of interest. Target is trying to capitalize on that interest by making available some fairly appealing offers. The retailer is offering an across the board 15% discount on iPad Pro models with the coupon code CYBER15. REDcard holders can get an additional 5% discount on their orders as well. Breaking it down:

As always, MacMall is not missing out on offering a wide array of savings though it may be pretty modest. The retailer is offering $12 off on select iPad Pro models.

It is important to note that some models mentioned above may not ship immediately, and could take up to 3 days in delivery.

Not many deals going around for this mini-tablet, but at Staples, you can get as much as $100 off this Monday.