CyanogenMod Installer For Android Is Now Live In Play Store; Brings CM To The Masses

CyanogenMod is undoubtedly the biggest name in custom firmware when it comes to Android these days, and with good reason. With support spanning all the handsets that hackers and enthusiasts are likely to ever want, CyanogenMod is very likely to be available in some shape or form for the device that’s currently sat in your pocket.

If there’s one complaint that has always been aimed at Android device modding and tinkering though is that it isn’t really the easiest thing in the world. Various ROMs, a collection of flashing utilities and even the need for the command line at times has left less techy types often bewildered. CyanogenMod has been aware of this issue in the past, and is currently working hard to try and make the whole flashing process as easy as possible.

Which is why a new CyanogenMod Installer has been released on the Play Store. Free, and available to download now, this new app will guide users through the initial setup required to get the CyannogenMod installation underway, and will also point them to a website that will allow the downloading of the correct ROM files for their device. Obviously they’ll still need to have a supported device, but it makes the whole process a little more streamlined. Which is nice. 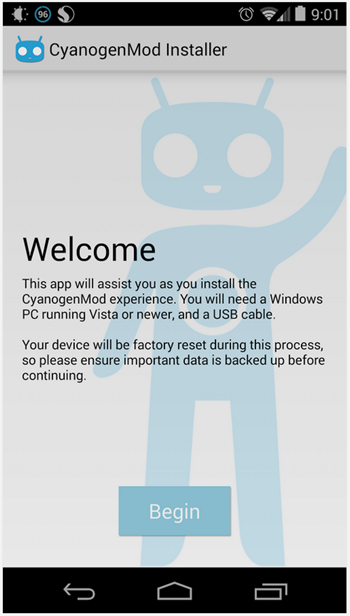 If you do download CyanogenMod Installer you’ll also need a PC running Windows Vista or later and a reasonable USB in order to make the magic happen.

We’re still not quite at the point of being able to turn the process of flashing an Android device into a two-minute job that anyone can do with their eyes closed. We’re certainly getting closer though, and anything that gives users control of their phones and tablets back has to be a good thing as far as we’re concerned. Hats off to CyanogenMod for trying to make Android hacking a little more mainstream, too. 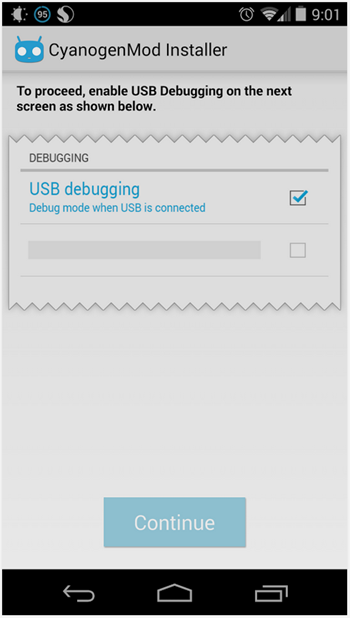 To get started, first download the app from the link which we’ve embedded below. Once you’re done with that, you need to grab the desktop client of the installer which you can grab from CyanogenMod’s official website, by pointing your browser to: CyanogenMod.com

(Download: CyanogenMod Installer for Android on the Play Store)