There is no doubt about the fact that Nokia’s recently announced Lumia 920 is going to make a serious splash in the smartphone market when it is eventually released to the public. The gorgeous design and inclusion of Windows Phone 8 makes it a very attractive prospect for those looking to acquire a new device, and that is before you even start to take into account the addition of native Augmented Reality features and fantastic little inclusions like wireless charging based on the Qi Standard.

We watched on as Nokia and Microsoft held a joint media event to not only announce the Lumia 820 and 920 but to also run through a few finer points of Windows Phone 8. Although the announcement of the Lumia 920 brought a lot of positivity, it was noted after the event that the usually ever present cyan colored device never made a single appearance during the event with most of the demonstrations taking place of a rather awesome looking yellow unit. Nokia hadn’t released any official comment about the lack of cyan but did respond to enquiries with a suggestion that we may be seeing a gorgeous cyan Lumia 920 soon. 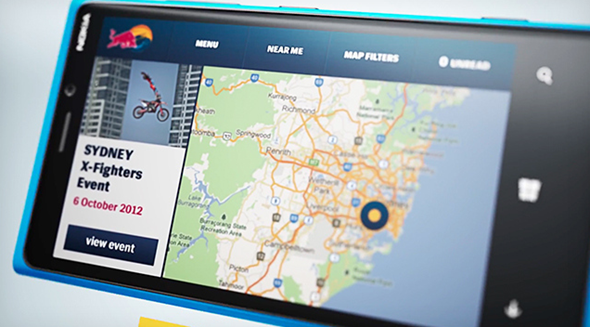 Worry not cyan lovers, as a couple of Nokia and Windows Phone promotion videos seem to suggest that we will indeed be welcoming a cyan Lumia 920 into our lives with wide open arms. It takes someone with a much keener and inquisitive eye than me to spot these things, but the existence of the cyan device was first picked up in a Windows Phone video release onto YouTube about four days ago. A second sighting of the cyan device has now been seen in an official Nokia teaser video that has been designed to promote the World of Red Bull app that will be exclusive to the Lumia.

It’s obvious that Nokia is either wanting to keep this cyan release a secret, or make some kind of viral issue about it to draw attention to the official release of the Lumia 920. The majority of the video features the Red Bull app being demonstrated on a yellow and red Lumia 920, with the frame of the yellow device flashing to Cyan for a split second around the 0:38 mark of the video. Check it out and see if you can see it: