Google TV is just one of a slew of web-centered streaming content services, but is quickly becoming one of the most popular, with Vizio – manufacturer of the Co-Stora set-top box for Google TV – struggling to keep a decent amount set-top in stock due to high demand. For those of you using Google TV ( I know there are many of you), a new extension for Chrome will allow you to control GTV straight from the browser, working in much the same fashion as the numerous remote apps for Android.

The difference with the extension, which operates under the name of Chromemote, is that one needn’t actually own an Android device – it works with any device rocking Google Chrome. From a MacBook Pro to that old Compaq lying around for emergencies – as long as you have Chrome, you can use Chromemote to control your Google TV.

It may seem counterproductive to watch tv while surfing – even at leisure, but with so many people now in the business of performing several digital tasks at once, Chromemote is actually a pretty novel idea. It will pair your device and HDTV up using the power of Wi-Fi, and the on-screen remote appears looking strikingly similar to the Google TV Remote Android app.

The extension is still in beta, although it’s very stable and functional from what we’ve gathered. If you keep your laptop near you when watching Google TV, then this is certainly an extension tailor-made for you, and will lessen the need for you to have so many devices lying around at any given moment (not that this is a bad thing, mind, but I digress.) Switching channels, launching apps, and tweaking the volume is effortless, and the remote is also responsive to some keyboard input – ideal if you’re typing a search query. 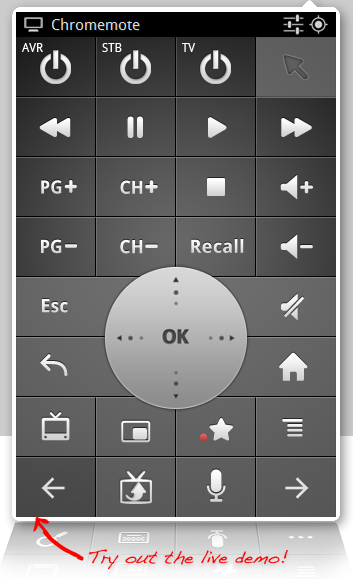 Thanks to Chrome’s open source nature, Vizio, Sony and LG aren’t the only companies with their beady eyes on creating the very ultimate in set-top devices, and I’m sure consumers are going to be spoilt for choice once Google TV really begins to make a fuss.

Download the Chromemote extension for Google Chrome right now by heading over to the Chrome web store page.