It seems that demand could be strong for Apple’s 2018 iPhone lineup. According to a new survey, a staggering 42-percent of consumers are looking forward to Apple’s new iPhone refresh, with only 24-percent showing an interest in Samsung’s recently announced Galaxy Note 9.

PCMag has put together a survey of 1,555 respondents with the aim of finding out exactly which smartphones they were most looking forward to this year.

Out of those 1,555 respondents, 42-percent stipulated that they were most excited about Apple’s next-generation hardware, which could include iPhone 9, iPhone X Plus, and even iPhone SE 2 for those who want something a little more affordable. We don’t know what naming convention Apple will take for this year’s iPhone releases but it seems that consumers are excited about what may come.

24-percent of those who took part in the survey suggested that they were looking forward to Galaxy Note 9, which is the latest Android-based phablet hardware announced by Samsung at its most recent Unpacked event in New York City. Samsung will be hoping that demand for that hardware is significantly higher than demand for its existing flagship, the S9/S9+.

Then, after that, the numbers declined quite rapidly with only 7-percent of those surveyed suggesting that Google’s Pixel 3 hardware was on their minds. 2-percent of that 1,555 are interested in the OnePlus 6T, 4-percent for the LG V40, and 11-percent of those asked actually stated that they weren’t particularly looking forward to anything. 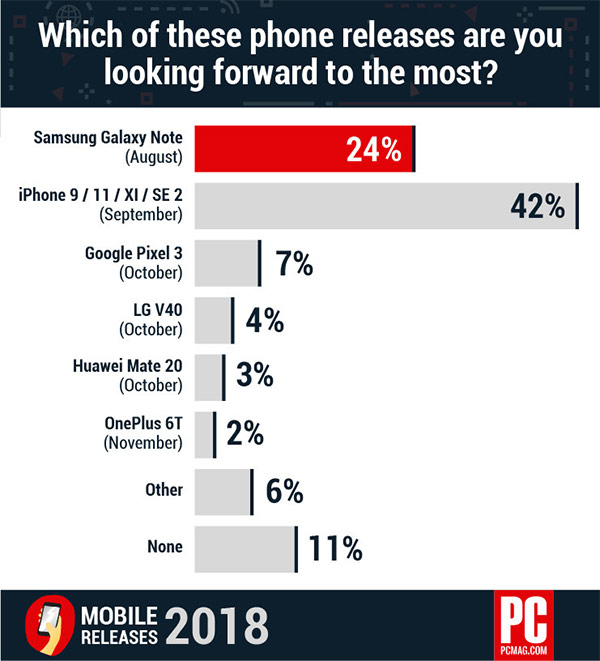 Interestingly, the survey also found out what devices the respondents already used and 8-percent of the 24-percent focusing on Galaxy Note 9 are iPhone owners at the moment. The survey only represents a fairly small portion of users but if those numbers were extrapolated out then it’s likely that Samsung could be grabbing some Android converts from the iOS ecosystem when Galaxy Note 9 actually becomes available.

Samsung recently announced the Note 9 at a press event just a matter of days ago. Apple is yet to send out official invites for its iPhone announcement but we expect the new devices to be unveiled to the world during early September. If you were part of the survey, which smartphone would have topped your list?