When we report on cool gadgets, most of them come from well-established, or at least somewhat reputable companies. This time, however, we’re featuring a device that was created by a single Chinese geek with more extra time than most of us would have at our disposal. This enthusiast has created a touch-screen device with Apple’s branding, which, dare we say, looks comparable to most tablets available on the market today, only cleaner. 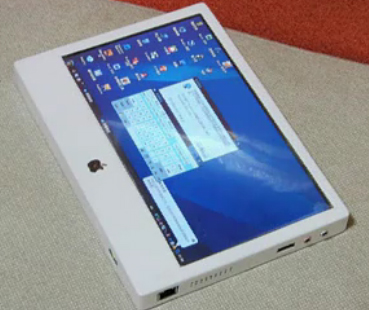 As you can tell from the picture above, this device looks more like an early artist-created iPad concept, but it’s very real. The device seems to have been built from discarded computer parts, all put together in a nice case with Apple’s logo stamped on it. There also seem to be speaker and microphone ports, what looks like an SD card slot and an Ethernet port.

As you might expect, this device isn’t running iOS or even Mac OS X. Instead, it’s running an operating system we’re all sick of hearing about: Windows XP, along with what looks like a dark Windows 7 skin. While the operating system might be a drawback, it seems to integrate very smoothly with the hardware’s touch-screen, at least seamlessly enough to make Google Earth surprisingly usable on this device, as you can tell by the demo video below.

There’s more to this device than it might appear at first. The builder has also taken the time to carve out a leather case that’s used for storage, but more importantly, it also has a physical keyboard embedded into it. By mounting the device onto the case, the device can be used with a physical keyboard and a wireless mouse, which is more than what many multi-billion dollar worth companies have done in this field. 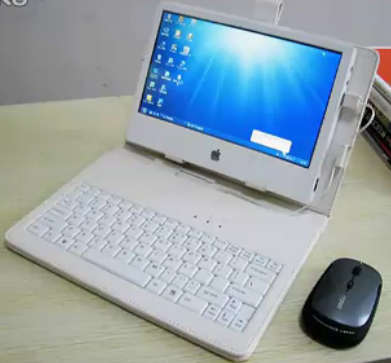 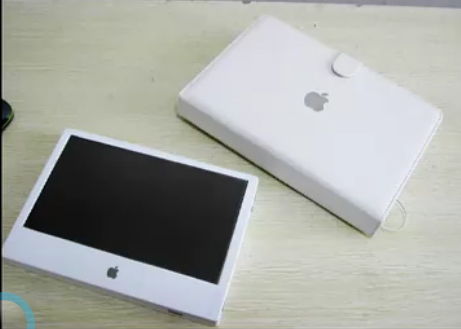 More than just a weekend project, this piece of hardware actually introduces some new user experience paradigms. That goes without saying that this, much like any other DIY project, likely isn’t ready for prime time, but I’d love to see further iterations of this Apple-branded tablet. I only hope that Apple doesn’t bring this project to a halt for using the well-known Apple logo, which perhaps wasn’t necessary, but not relevant either way.

Of course, this wasn’t built to replace anyone’s iPad, but the final result is indeed beautiful. While the next gen iPad will land next year officially (or maybe this fall?), but this gives us an idea what a full blown OS will look like on a tablet device, who knows Apple might lose their minds and tap in OS X instead of iOS in their next iPad iteration, just saying.