Originality is a rare commodity in this day and age, so when something quirky, intriguing and original is created, it only seems right that we stand up and take notice. Like many folk seeking employment in our society, designer Frederic Tourrou decided to make himself some business cards in order to get his name out there and hopefully, find work. Being the tech-minded soul that he is, however, he decided to base the theme of the cards wholly on iOS – incorporating the lock screen and contact page of Apple’s popular mobile OS.

While we applaud its genuine ingenuity, we can’t help but think it might be a little too cheesy, and any employer initially impressed by the quirky design may quickly revoke any positivity towards Tourrou after seeing the "slide to unlock" segment, which has been changed to "hire me," which is about as cringe-worthy a statement as you’re ever likely to see. 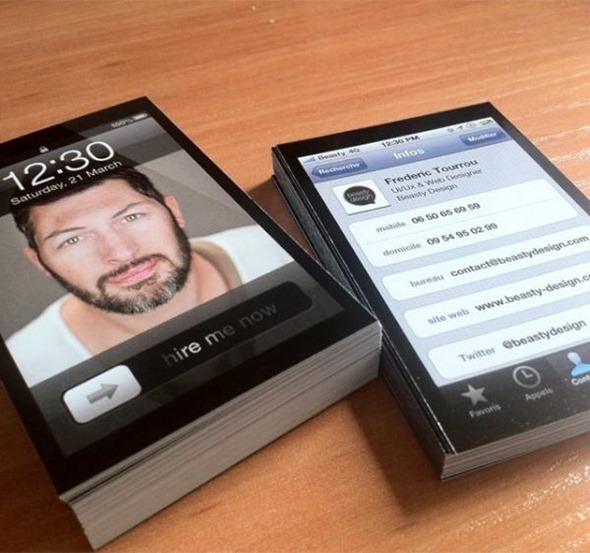 Although he’s getting his fair share of stick from the big tech blogs, Tourrou seems to be taking it in his stride, and although Gizmodo reckons the cards present him as the "probably insufferable" type of guy, he knows just how big a coup it is for him and his start-up, Beasty Design, to reach the headlines. He stated – via his Dribbble account – that even Apple called him up to offer their own seal of approval, so as far as getting his name out there to prospective employers, he has exceeded expectation. 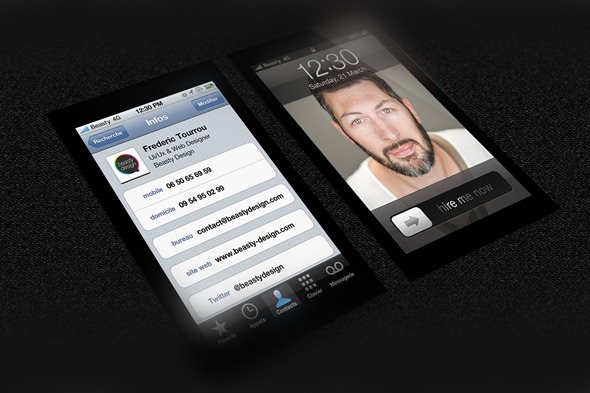 Not only that, but because of his chosen format, he has managed to pack in boatloads of detail about himself, but without it looking excessively weird or forward. For example, having a large image of your face isn’t the done-thing in terms of business card etiquette, but as it’s an iOS lock screen, it’s excusable.

Whether his unmissable mugshot helps him garner employment remains to be seen. There’s no word, as yet, regarding anybody making a move for his services, but if this episode is anything to go by, he could have a solid career in marketing on the back-burner!

What do you guys think? Stroke of genius, or the tale of a very lucky, (and even more cheesy) Apple fanboy? Leave your comments, as ever, via the usual mediums below.