Now that Google and LG have finally put to bed the rumors and confirmed the new Nexus 5 handset, we can begin to concentrate on the actual important aspects of the device. Prior to its release, the Nexus 5 was undoubtedly one of the most leaked handsets that we have seen with images, purported technical specs and even video glimpses of the device appearing on an almost daily basis. The unofficial unveiling of the hardware didn’t bring any surprises as the leaks had already told us pretty much everything that we need to know, except for one thing – how the device will perform in the real world and especially how it stacks up when compared against its predecessors in the Nexus range.

The latest Nexus smartphone is the fifth release in the range that has seen Google work with a number of different manufacturers. The fifth iteration to come in the last three years is a product of a partnership with LG Electronics and is probably the most widely anticipated Nexus branded device yet. The guys over at PhoneBuff have wasted no time in seeing what all the fuss is about, and if the hardware can really compete in this competitive market by not only putting the Nexus 5 through its paces but also comparing its performance against all Nexus smartphones that came before it. 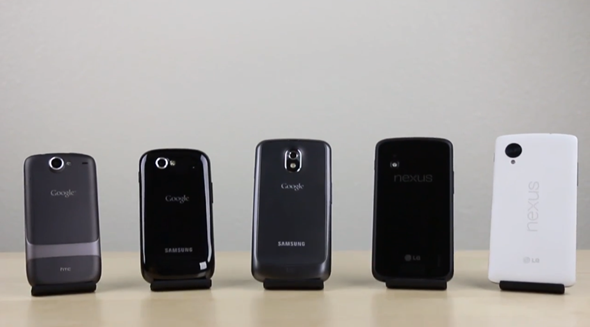 The uploaded video depicts a speed comparison test between every Nexus smartphone that has been released into the market. This includes the original Nexus One, the Nexus S, the Galaxy Nexus, the Nexus 4 and the latest and so-called greatest to hit the market, the new Nexus 5. The line-up features hardware manufactured by Samsung, HTC and LG and pits the five units and their various versions of Android against one another to see just how far we have come in terms of hardware and software performance over the last three years.

The initial boot up tests determine how long each devices takes to go from powered down to actually allowing the user to interact with the operating system. As you might expect, the 2.26GHz quad-core processor in the Nexus 5 ruled the roost with the quad-core Nexus 4 following hot on its heels. The original Nexus device, once thought of as ahead of its time, slugged in at last place showing that its 1GHz single-core processor and 512MB RAM just doesn’t cut it with the big boys.

The remaining comparisons that put the CPU and GPU under pressure returned the results that you would expect. What’s extremely interesting is to be able to see the performances of the hardware side-by-side and witness just how much smoother and quicker the Nexus 5 is compared to its ancestors. Check out the video and see for yourself.