Watch The Nexus One Evolve Into Nexus 5 In 3 Seconds

The age old saying of “you can’t know where you’re going until you know where you’ve been” can be applied to so many different things in life. It’s widely accepted that those words of wisdom were first uttered in the context of taking a look at our ancestry and heritage with the aim of planning a future for ourselves. However, the same words can also be applied to consumer technology with the embedded GIF summing up beautifully the evolution of the Nexus smartphone over the last three years.

The Nexus One – or HTC Passion as some enthusiasts may like to call it – was first launched back in 2010 and signaled Google’s intention to work with hardware manufacturers to produce great smartphone experiences. The 3.7-inch device was obviously powered by Android and shipped with a Qualcomm Snapdragon QSD8250 SoC clocked at 1GHz. The cleverly created GIF clearly shows that the relatively short life of the Nexus One was potentially warranted as it looks extremely small in comparison to those succeeded it and extremely dated. 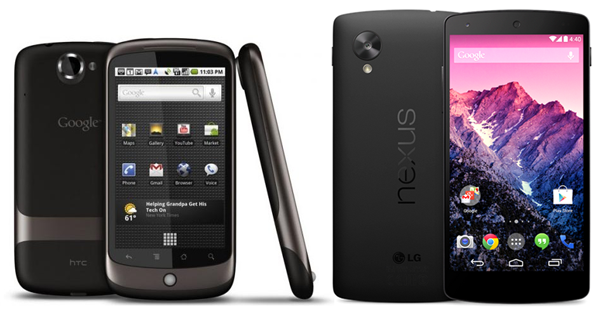 The evolutionary GIF does a fantastic job of showing the differences in aesthetics and form factors over the last three years. It’s immediately evident that different manufacturers which Google have worked with have had a large part in the design and development process of the device. As the smartphone market has matured and grown in the last three years the trend has moved more towards pushing out devices with larger displays. The consumer need to interact and consume still and moving visual media has meant that the logical step is to produce hardware with a larger form factor.

The latest in the range, the LG-manufactured Nexus 5 – features a gorgeous 4.95-inch 1080p display and is powered by the latest edition of Android. The device will be the first unit to ship with the new Android 4.4 KitKat offering and will showcase what is possible when latest and greatest version of Android is ran in conjunction with the latest flagship Nexus device. The Nexus range of devices have undoubtedly evolved massively and matured greatly since the original launch in 2010, but it definitely leaves us excited to see what Google has in store for us over the next three years.