Just when we all thought that we knew what to expect from Samsung and its extremely well-endowed budget for promoting its phones, the company has managed to up the ante and possibly produce the best piece of billboard to come around since Don Draper sold something really boring that we can’t remember the name of. It’s that good! 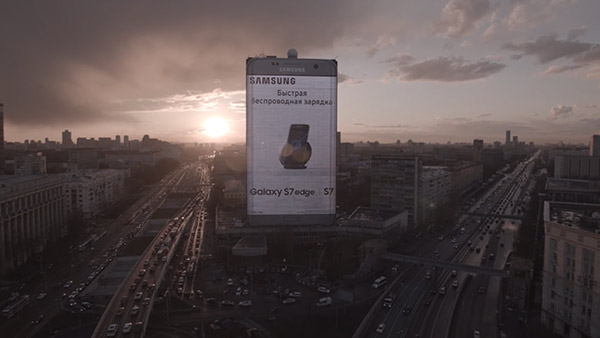 In case you’ve managed to prevent yourself from skipping all these words and moving straight onto the embedded video, we are, of course, talking about a new billboard that has been installed in Moscow, Russia. The billboard, which measures a whopping 80 meters (262 feet) tall and 40 meters (131 feet) wide, is attached to the side of a large building that can, we are told, be seen for a couple of miles around. Even more impressive for Samsung’s team is that the building is situated on the main road to the airport, meaning over three quarters of a million a day will see it in all its glory.

And it really is glorious. As you can see in the video, Samsung has basically turned the whole side of a building into one of its Galaxy S7 Edge smartphones, and it catches the eye. So much so, the thing can be seen from as far away as 2.2 kilometers (almost 1.4 miles) away. Now that right there is impressive.

It is powered by numerous LED panels that work together to tout some of the Galaxy S7 Edge’s biggest features, all of which look even better when they’re building-sized! In all honesty, we can’t really do this thing justice, and all you really need to do is sit down and watch the embedded video in order to appreciate just what we are talking about here.