Apple recently started to warn users about any 32-bit applications that are running on their Macs and may not be supported by future versions of macOS. It’s a similar move to the one Apple made recently on iOS, with only 64-bit apps now supported.

However, the switch on the Mac may come at a heavier price for users, with many applications unlikely to be updated due to the hugely different development landscape on the desktop. With that in mind, it may not be a bad idea to be acutely aware of which apps are on your system, and which of those will not be supported should 32-bit support be dropped soon.

While Apple has started to show a dialog box when launching 32-bit apps that suggests they are “not optimized” for your Mac, it’s actually possible to get a bird’s-eye view of what is installed and potentially impacted, all in one place.

Here’s where you get it.

Step 1: Click on the Apple logo at the top of your Mac’s screen.

Step 2: Hold down the Option button on the keyboard and click on System Information.

Step 3: Scroll down the left sidebar until you find the Software entry and expand it.

Step 4: Next, click Applications. It may take a little while to populate depending on how many apps you have installed.

Step 5: At the top of the app, there should be a menu option to sort apps by 64-bit (Intel). Click on that and you will be presented with a list of apps that are 32-bit only. They will helpfully be labelled “No” instead of “Yes” under the 64-bit (intel) column. 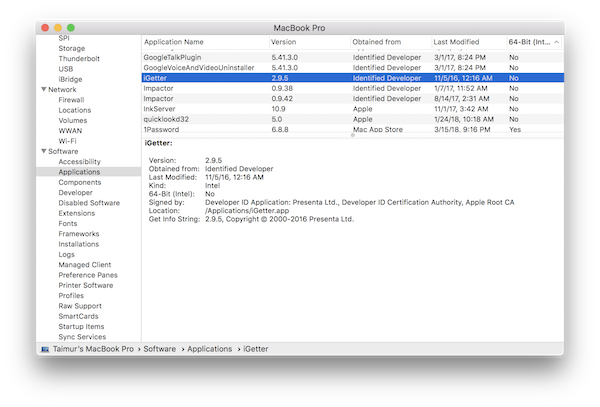 There’s little that you can do if you find some apps in there that you rely on. While many of them are actually Apple’s, so will likely either receive updates or be replaced with new apps, those from third-party developers may never receive updates. We suggest contacting individual developers to ask the question before you’re forced to find an alternative at short notice.