The battle between Apple and jailbreak development teams has been going on for a number of years now, and with the recent release of an untethered jailbreak for A4 devices, and the impending release of an A5 version, it is unlikely it will end anytime soon. However, I think even the main developers and hackers would admit to being a little naive if they thought that the process wasn’t getting a little more difficult with every iOS release. 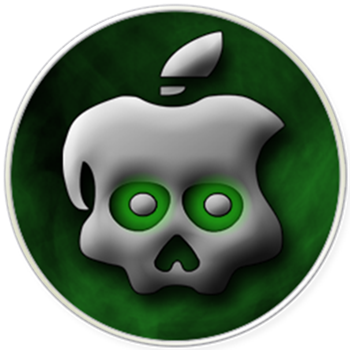 Of the main challenges faced by development teams such as Chronic Dev, is finding an exploit in a particular version of the operating system, then using that bug to produce a working, distributable jailbreak. The problem is that in order to exploit any vulnerability the dev teams must crash the device thousands on times in order to check the behaviors of the vulnerability and get a better understanding of how to work with it to achieve the required goal. Each time a device is crashed, a crash log is generated, with the default behavior of the OS being to send that crash log directly to Apple for investigation. This is one of the main catalysts in a large number of potentially useful vulnerabilities being closed by the fruit company.

In November last year, the Chronic Dev Team released a crowd sourcing tool called the CDevReporter which is available for Windows and Mac machines. The main function of this tool is to pull all of the crash reports from a single iOS device (via iTunes), package them up and then send them directly to the Chronic Development Team for investigation. The team hopes that by doing this, they will be able to sift through millions of user generated logs and find something potentially useful for a future jailbreak.

The CDevReporter tool has now been ported to iOS devices by developer Luke Young, making the process that little bit more streamlined, enhanced for those people who want to help but can’t be bothered to connect their devices to a tool every so often and actively upload the crash reports. CDevReporter for iOS is available via the Cydia store, and manages the sending of device crash logs covertly, doing its working silently in the background without any user intervention. 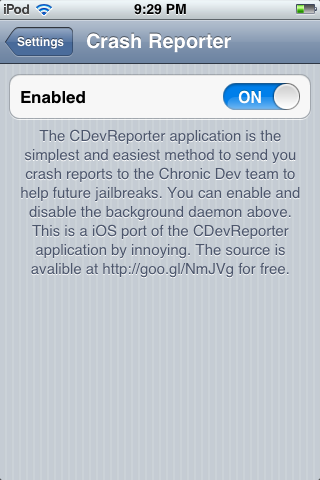 Whenever the tweak finds a new crash log on the device, it is automatically uploaded to the secure, private Chronic Dev servers to be used as ammunition in their information war against Apple. The CDevReporter does not add any icons to your device, but does have an enabled or disabled toggle within the settings application. It is also worth noting that the uploading of crash reports will inevitably use cellular data if the device is not connected to a wireless network, so costs could be incurred for data if you exceed your tariff.

If you intend to download this package then please be aware that this is not an official port of the crash log tool by the Chronic Development Team. To the best of my knowledge, the developer is not affiliated with Chronic Dev. It is stipulated within Cydia that the CDevReporter for iOS is in no way guaranteed to work and usage is entirely at your own risk.

The iOS port of CDevReporter is available now, free of charge on the Big Boss repository and requires iOS 5 or above.