I’ve lately been writing a lot about data backup solutions. Of course, they’re extremely important, since that’s necessary to protect your data and secure your personal information. No matter what platform or device you’re using, there are always backup applications and solutions available that would help you achieve the said purposes. Android, just like the rest, has no shortage of such apps, some of which are advanced enough to perform backups at the very basic level, copying complete partition images of your device to a safe location for future recoveries (nandroid backups, anyone?). Even just yesterday, we brought to you a backup solution that could save everything to a desktop PC – both Windows and Linux – without requiring root access, unlike the most famous backup tools.

Backups are great, but what if there’s something that takes the whole concept to another level by adding cross-device sync facility. When Apple introduced iCloud with iOS 5, one of the most catchy features for me was the ability to have your app data synced across all devices – iPhones, iPod touches and iPad – linked to the same Apple ID. Until now, Google’s droid lacked a similar solution. Of course, you had the ability to restore app backups to any device through the usage of various apps (and even the native ADB backup introduced with Android 4.0), but there wasn’t a real-time solution. This is the gap that Carbon aims to fulfill. 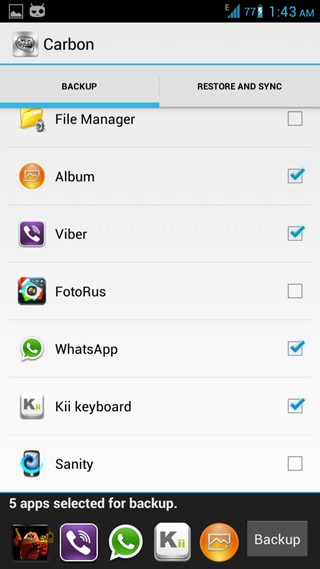 Developed by Koushik Dutta (or Koush) – the genius behind ClockworkMod Recovery and a lot of other Android goodies – Carbon is an Android backup solution that can save your apps and associated data to either the SD card, Google Drive or Dropbox, and sync them across other devices in real-time. So, if you were playing, say, Angry Birds on your smartphone, and want to pick up where you left off on your Android tablet later on, Carbon will let you do that. It provides not only data security and protection, but also something that Apple users had been boasting around for a long time. 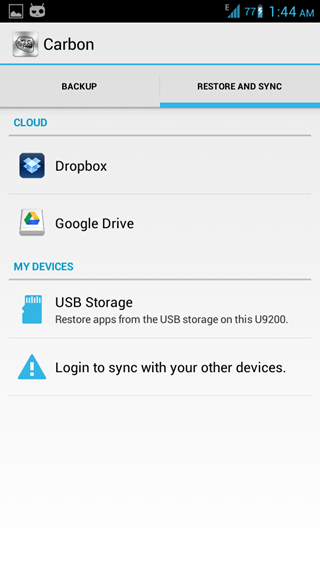 From an interface point of view, Carbon is fine – nothing fancy but not lacking either – and will allow you to select which apps you want to back up, along with the location to save them to. The app is in beta for now, and hence, rather buggy (Dropbox backups, for instance, can be retrieved, but cannot be selected as a save location for now), but Koush promises to bring a stable version really soon. Also, the current version requires root access, and hence, will work on only those devices that have superuser configured and working. The final version, however, will be free of such limitations, which would definitely be a welcome addition to a lot of users that cannot (or will not) root their devices. As for the bugs, judging by other productions from the developer, you can rest assured that they will be taken care of.

Carbon will work on Android devices running version 4.0 or above. The beta version will expire after one week’s usage.