With Microsoft’s Surface tablet not yet even slated for a release date or given a public price, one of the company’s co-founders has claimed that the upcoming tablet may lead Microsoft to re-think its tablet strategy. In fact, the one and only Bill Gates believes that Apple may even need to make its own Surface in order to compete.

Speaking during an interview with PBS’s Charlie Rose, Gates waxed lyrical about the benefits of Microsoft’s recently announced Surface tablet, saying that Microsoft’s approach to the industry leaves customers in a position where they need not make compromises. Gates is clearly making reference to the Surface’s PC architecture – depending on which version you go for – and fancy Smart Cover-like flap that also doubles as a keyboard.

Much has been said about the Surface’s position as almost an ultrabook with a detachable keyboard, and few can argue that the idea will appeal to many, including us here at Redmond Pie. Whether that appeal will remain when the Surface receives a concrete price though, remains to be seen. If the machine retails for ultrabook-like prices, then the iPad need not worry too much about the Surface eating its lunch.

Gates did comment on Microsoft’s first attempt at a tablet. The ill-fated Tablet PCs that were sold by OEMs around 15 years ago were apparently “way too early” which is code for their being too expensive and being thrust into a market that just didn’t exist yet. 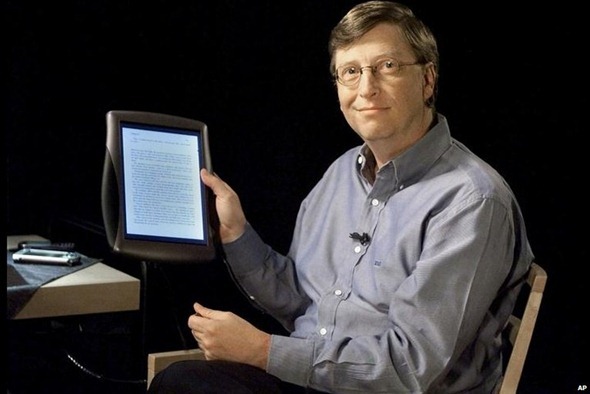 The fact that Gates is bullish on the potential success of the Surface is obviously no surprise, but his going on to suggest that Apple may need to copy Microsoft in order to compete is an interesting one. Apple’s iPad model is clearly very popular with consumers, and for Apple to come in with zero market share and propose to tell Apple how to do things is bordering on the silly. That said, if this time next year we are talking about Microsoft’s awesome new tablets, running Windows 8, and a disappointing iPad 4, then we’ll all look rather silly!