Mobile devices, such as smartphones like Apple’s iPhone and Samsung’s Galaxy S7, have progressed dramatically in recent years in terms of functionality and what they are actually capable of doing for us on a daily basis.

With that said, it doesn’t matter how much technology progresses, there’s always going to be some features that are left in the dark ages, such as capturing a screenshot. You may think Apple’s current system is perfectly acceptable, but what about when you have a long WhatsApp conversation or a webpage open in Safari that you want to capture in its entirety in one image? Step forward BigShotJb to solve that issue for jailbroken users. 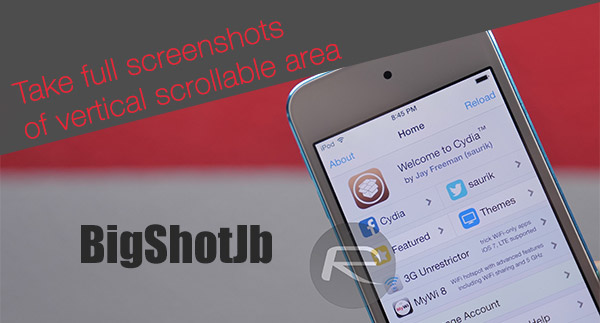 We would hazard a guess that it’s a problem that most users have faced on one or more occasions. Trying to screenshot a view with long, scrollable content has generally meant that device owners have had to fall back to taking multiple screenshots of the content and then trying to stitch them together manually to form one seamless image.

“BigShotJb” jailbreak tweak removes that issues in one fell swoop by manipulating the viewable window of the jailbroken device to capture all of the content in that view in one shot. Even the stuff that’s out of bounds and can’t be seen without scrolling.

This tweak is probably one of the most simplest tweaks to get up and running with. Simply install BigShotJb tweak from Cydia, assign an action to the package via Activator, and then you’re pretty much good to go with a whole set of new functionality that allows the seamless capture of full window screenshots without having to put in any additional let work or teach yourself the intricacies of Photoshop to tie images together. 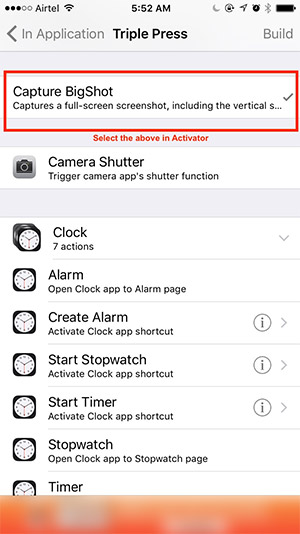 It’s really astounding that something like this hasn’t actually been thought of before, or that it doesn’t come as part of a stock iOS installation. Like a lot of packages from Cydia, BigShotJb depends on the use of certain libraries, and therefore will require the device to be put through respring after the package has been installed from the BigBoss repository.

Don’t have a jailbroken device? No problem. There’s an app on the App Store that does same kind of thing without requiring jailbreak. The implementation or ease of use of that app isn’t as easy as BigShotJb, but it does the job. We previously covered it, along with an option for Android users. You can check it out here: How To Take Scrolling Screenshots On iPhone Or Android.