Apple’s iOS platform has progressed in leaps and bounds over the last few years in terms of what it’s capable of and the features and functionality that are baked in. The combination of purpose built hardware and software allows Apple to produce a user-experience that generally outclasses most other hardware/software combos on the market. But that progression doesn’t mean it doesn’t have issues or bugs of its own. In fact, a new bug has come to light today and it appears to be a little date and time trick that is at the center of it all. But what’s the bug? Well put simply, the trick can brick any 64-bit iOS device it’s performed on.

So, the issue goes a little something like this; you head on over to Settings > General > Date & Time within iOS, and then change the device’s date to January 1st, 1970 (first set the year to 2000, then go back to Settings, then go to Date & Time again and set year to 1970). For some reason, going through that process with that specific date and year will brick the device. For those out there that aren’t familiar with the terminology, it essentially renders the iOS device useless, and we’re actually talking about a hard-brick here. A state that no amount of restores via iTunes will cure, with your best bet being, to take it to the Genius Bar and have the battery disconnected and reconnected. Of course, we’re not actually going to risk process on our own iPhones, iPads and iPod touch units, neither do we recommend you doing it, but there seem to have been enough people who have ran through it to confirm, that it is in fact a genuine cause for concern. 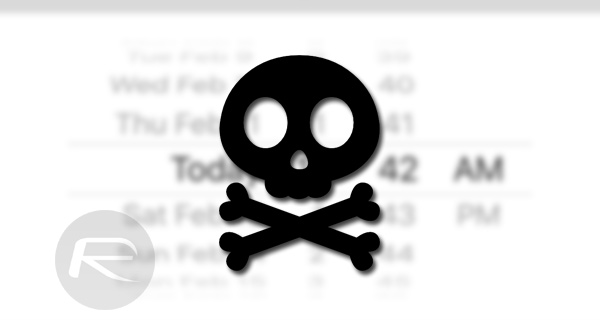 As mentioned earlier, a number of those individuals who fell foul of the mysterious date issue were under the impression that a simple DFU mode restore via iTunes would rectify the issue. The device can be placed into DFU mode, and subsequently restored via iTunes, but even then it simply gets stuck on the Apple logo boot-up screen, and refuses to go past that. Interestingly, this bug seems to be haunting iOS devices with a 64-bit CPUs only, so in essence, any iPhone, iPad, or iPod touch device with the A7, A8, A8X, A9, or A9X chipset is prone to being permanently bricked. More so, it does not matter what version of iOS you’re running either.

There are a number of theories behind why this is actually an issue. The popular consensus appears to be that, setting the time and date to January 1st, 1970 causes the internal time clock to be less than zero, and therefore confuses the device forcing it to freak out. The bottom line is that programming and handling date and times is incredibly complex, and we can best speculate for now.

You’d expect Apple to get it right and not put our hard-earned money at risk with such a ridiculous bug that can be exploited for any ill-intentions by anyone. For now, we also expect this to be fixed sooner rather than later with Apple rolling out a quick software update fix to this huge flaw in the iOS code.