Battlefield 4 Announced, Will Be An Exclusive Beta With Medal Of Honor Warfighter Next Year

By means of a press release, Electronic Arts has officially announced Battlefield 4, and noted a beta release will be made available in fall 2013. Additionally, those pre-ordering Medal of Honor Warfighter Limited Edition will be granted free access to the Battlefield 4 beta, and although the game is quite a significant way away, EA has stated more details regarding Battlefield 4 will be revealed in due course.

Nobody even knew the game was in existence until a couple of days ago when a leaked image began doing the rounds, and with this announcement, it would seem the "leak" was an intentional buzz-builder. 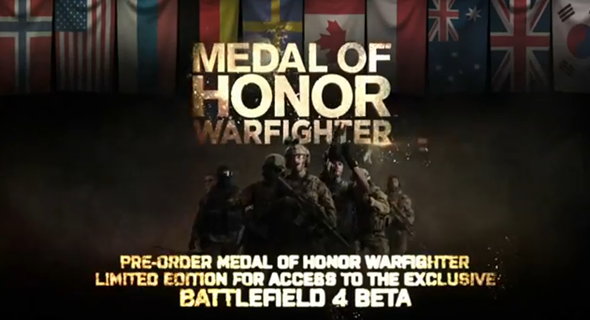 The Battlefield series began some ten years ago with the release of Battlefield 1942, and through time, has maintained its core focus on providing an immersive, war-time first-person shooter. Although it doesn’t share the same amount of unit sales as some of the bigger titles, it has its fair share of fans, and although Battlefield 3 was something of a let down, gamers will be hoping the next installment is an improvement.

Unlike betas in other areas, history states Battlefield 4 may probably still release late next year. With around 15 months until the beta is scheduled to arrive, you could be mistaken for thinking the final release should drop mid-to-late 2014. However, last time around, Battlefield 3’s beta was pushed just a month before the proper version, so it will be interesting to see how long this title lurks in the beta wilderness.

It will also be interesting to see the reception from gamers. Having seen the leaked image, it looks really similar to Battlefield 3, and as such, I struggle to see just how consumers are going to be thrilled by the prospect of Battlefield 4. With so many exciting titles releasing over the next 18 months, I simply cannot see this one picking the momentum for the series back up.