While Apple never indulged interested consumers in the ‘waterproofing’ – albeit being water-resistant – abilities of the Apple Watch, it turns out that the new wearable can hold its own when faced with such circumstances. However, this recent test of Cupertino’s new wearable by endurance sports enthusiast and tech blogger Ray Maker has him pushing the limits here, or so we think.

When the Apple Watch was released, we saw a bunch of videos hit the Internet as the wearable went through some vigorous testing, which also included the device taking a dive inside a swimming pool, but nothing as rigorous as Ray Maker had planned. 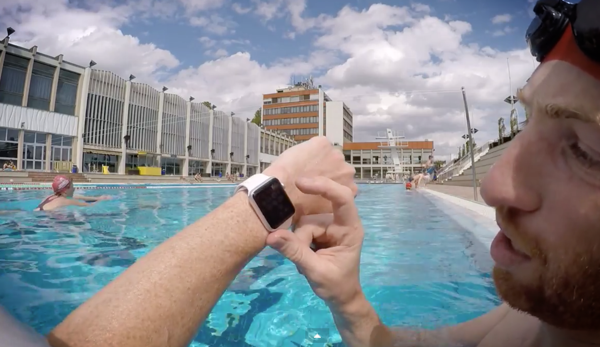 Cupertino’s new watch has seen the depths of backyard swimming pools, but now we see this wearable hit the water with some higher intensity, as it’s worn while swimming like a pro. The impact on the watch as the wrist hits the water is pretty much a true test of any wearable’s waterproofing / water-resisting powers. As noted by Maker: “It’s the wrist hitting the water that’s so difficult for watch waterproofing due to the impact forces.”

With the watch having been put through a 1,200 meter swim and being in the water for about 25 minutes, it was time to raise the bar a bit, as Maker took to a public pool’s high diving platform to plunge himself into the water below while wearing the Apple Watch. Maker notes that this sort of activity is loosely mentioned in the list of warnings given out by Apple as something that should be avoided. More precisely, Apple says: “Dropping Apple Watch or subjecting it to other impacts” is something that the device is not designed for.

Now, with a pro swimming and diving session, it’s impressive that the Apple Watch manages to come out unscathed in all these activities. Maker made two jumps, one from a 5 meter platform, and one more from 10 meters, but that did not disturb the Apple Watch at all as it continued to perform normally.

The final phase of testing involved tossing the watch in a makeshift waterproof chamber which simulates varying meters of pressure. Now Apple designed its smartwatch to withstand only 1 meter of depth, but Maker put the watch through a depth of 40 meters, not once but twice. The result? The Apple Watch did not flinch for a second even.