Apple announced at its Spring Forward event that its upcoming wearable would become available to pre-order on April 10th. Numerous additional details have continued to emerge since then, and now, we’ve specifics on precisely when Apple Watch fans will be able to secure their unit.

From 12:01 AM PDT on April 10th, early adopters will be able to make their pre-orders official, although with try-on sessions being held from that date and through to the retail launch on April 24th, many will surely want to test the gadget out before they go and part with any money.

The fact that Apple is allowing consumers to try the device before purchasing is a testament to how confident the company is in its latest new product, and while it has its fair share of skeptics, there’s also a genuine feeling that the device could hit the heights of the iPhone and iPad in terms of changing the game.

Whether Apple Watch has what it takes to reach these high expectations remains to be seen, and even if initial sales are as strong as some analysts are suggesting, we won’t know until at least a year or two down the line whether this is just a passing fad or something that the Digital Age is calling for.

What is fairly certain is that Android Wear has had a stuttered start since emerging last year, despite a wave of support from manufacturers ranging from Samsung to LG. As such, the opportunity for Apple to seize the initiative is there to be grasped, and whether Apple Watch is here for the long haul or not, it probably won’t have much trouble establishing itself as the authority in this arena. 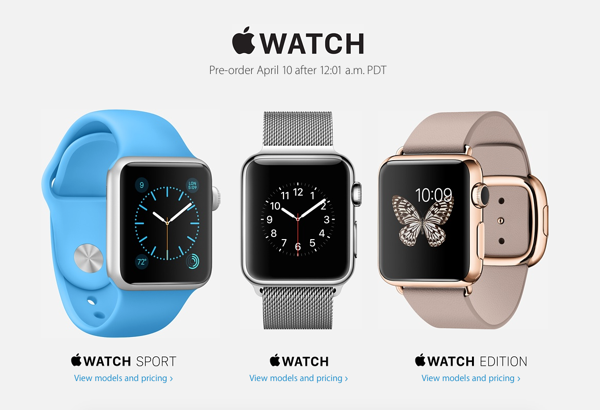 With just one week before pre-orders commence, you can now mark the time of 12:01 AM PDT (3:01 AM ET) on April 10th in your digital diaries. Apple has just updated its official site with the new information, so it’s not just hearsay, and if you’re keen to get started with one of the hottest properties in tech, getting your chosen configuration ordered early will lessen the chance of you losing out through stock depletion.

Will you be grabbing the Apple Watch from April 10th?