The Galaxy S6 Edge from Samsung can bend under the right amount of pressure after all. The super-phone from the Korean camp is supposed to be made of aluminum, which according to Samsung, is resistant to bending; a phenomena made famous by the introduction of the iPhone 6 Plus. Head over the jump for further information and the video which puts the Samsung Galaxy S6 Edge under a bend / stress test.

The Apple vs. Samsung war is a rough one, and there is just no room for either of the two to slip up, and it does get embarrassing when a product you claim will not bend, does so under the same pressure as the competition which is now almost six months old. An earlier video showed how the Galaxy S6 Edge does not bend, but this latest test holds more credibility since it was conducted in a lab. 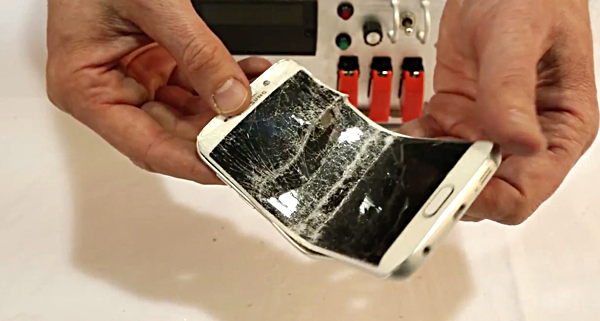 In a twist of fate, Samsung seems to have fallen to the same Bendgate scandal that had started out with the iPhone 6 Plus. You can watch the video below and see for yourself how the iPhone 6 Plus bends at 110 pounds of pressure. SquareTrade throws in the Galaxy S6 Edge, and the HTC One M9 as well to test out how they compare to the device that started it all.

Where the iPhone 6 Plus comes out slightly bent at 110 pounds of pressure, the Galaxy S6 Edge also gives in when put under the same amount of pressure. That’s not all, the screen on the Samsung phone also cracked, but as SquareTrade tells us, the display – along with touch inputs – was still working. So what happens when you add in more pressure?

Naturally, the iPhone 6 Plus bent beyond use with shattered glass and broken components under 179 pounds of pressure. Honestly, at this point I believed the Galaxy S6 Edge would require much more to break, but oh dear; the claimed aluminum 1603 just couldn’t take it at 149 pounds of pressure, breaking away beyond function.

Yes, the iPhone 6 bends, but “for Samsung fans it may be worse; instead of a bent phone, they may have a pocket full of glass.”